Skip to main content
on April 12, 2008
PEACEMAKING
I've been reading Margaret MacMillan's book "Peacemakers" lately and have been enjoying it very much. The book deals with the 1919 Paris Peace Conference and the resulting Versailles Treaty. Not only is it a fascinating part of European history, it's also a fascinating era as far as philately is concerned. All those new countries being formed, old empires falling apart, territories being fought over, split in the middle, changing hands and so many of these developments being undone in the run up to the second world war or even as recent as in the 1990s.
So last night I thought what a great idea it would be to set up a collection of this era. Record all the changes proposed at the Conference, their philatelic consequences and maybe even the eventual results. There are heaps of provisional stamp issues and although it must be hard to find, postal history must be even more rewarding, with cancellation of mail and explanation of routes painting a picture of Europe in turmoil.
I'm all excited and ready to go but I haven't got the time yet to really delve into the subject matter. Oh well, it's going to be a long-term project anyway! But I'll keep you posted!
And to give you a little sneak preview: I've just been reading up on the first definitives of Czechoslovakia, the Hradcany issue, and some of these stamps are overprinted SO 1920, like this one. 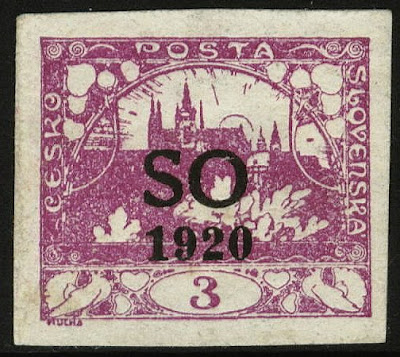