Skip to main content
on June 10, 2008
CLASSIC
Yes, I suppose you could call it a classic. Although, when thinking of a classic stamp, I immediately think 19th century, and we're talking 1933 here. A modern classic then? But that's more 1960s onwards, isn't it? A semi-modern classic then, or maybe even an early modern classic. Well, whatever the name, it's Belgium's Virgin Mary, or Blue Madonna. 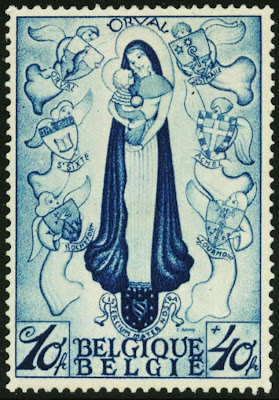 The stamp is the top value of the 1933 Orval Abbey Restoration Fund set, with the other eleven values depicting either photographs of the abbey 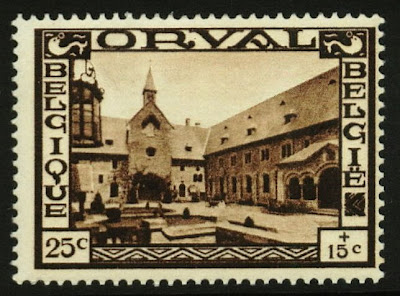 or events from its history, like the restoration of the abbey in the 16th and 17th centuries.

Belgium is well known for its charity stamps. In those early modern days, the majority of its non-definitive stamps had surcharges for various good causes. From 1928 onwards, the Orval Abbey Restoration Fund became one of those good causes. Sets were issued regularly until 1943. The earlier sets were sold as sets and single stamps would not have been available, which probably accounts for their high catalogue price. Our Blue Madonna had a postal value of 10f which must have been a lot in those years of economic hardship, and on top of that you would have had to fork out an extra 40f for the fund! It must have backfird on them, though, for later sets usually didn't have any higher value than 5f!
:-)
Adrian
Benelux