Skip to main content
on June 09, 2008
INFAMY!
Just when you think you know it all and life holds no more surprises for you (well, not really, but I just needed an intro), you open this auction catalogue and staring at you from one of the pages is an overprinted stamp you've never seen before, nor have ever heard of. So there's nothing for it but to try and get it! And I did! And here it is! 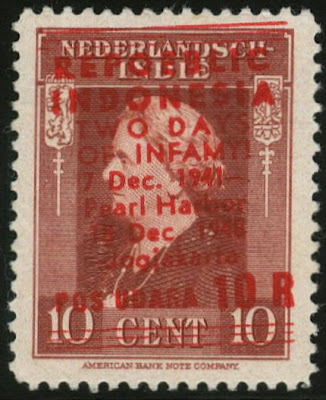 It is one of the American Bank Note Company definitives of the Netherlands Indies, originally issued in 1945. The overprint reads: "REPOEBLIC INDONESIA, TWO DAYS OF INFAMY!, 7 Dec. 1941 - Pearl Harbor, 18 Dec. 1948 - Jogjakarta, POS UDARA 10R".
Intriguing! The latter date refers to the start of the Dutch military intervention (code-named Operation Crow) against the new Indonesian republic, and the first date, I suppose, is included to make the Americans choose the side of the Indonesians. I couldn't find much information on this, but apparently, the overprint was produced by US stamp dealer Julius Stolow, as part of an agreement with the Indonesian ambassador to the USA, Mr Sumitro, and was produced in December 1948. If anyone happens to know anything more, than I'd be interested to hear!
:-)
Adrian
Wilhelmina

nnnnnn said…
Adrian, Hi.. good to see you back.. interesting articles as always.. one question.. how do you get the image size so good.. I had only used this blog site as my backup and as you may have read I am changing to blogspot due total incompetence of my previous service provide.. now I want to get my scans at the quality you get.

Appreciate it if you have time to email at cddstamps@gmail.com

In Stamp Magazine you will soon see an interesting article about dubious overprints "produced" by Mr. Stolow!