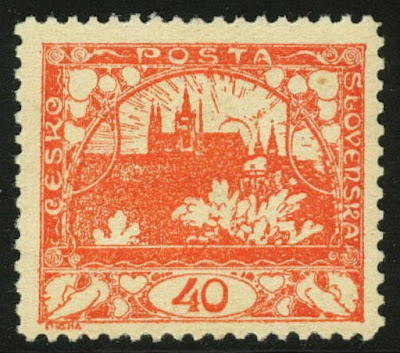 So what's not right about it? Well, if you have a Czechoslovakian catalogue, you'll find that this stamp was only issued imperforate! You see, the thing was that Czechoslovakia had just been founded and was still in a state of utter mess just after the first world war. When it started producing stamps, material, machines and knowledge was still lacking. So the first stamps were issued imperforate. 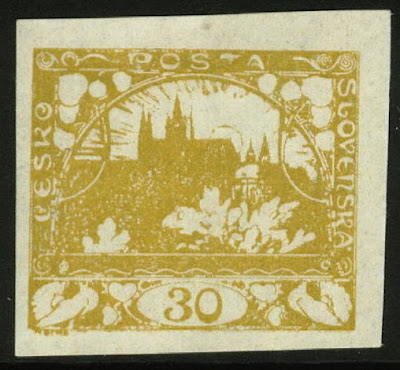 Later, additional values and some existing ones were perforated, but not this 40h. However, large companies and banks found the imperforate stamps rather a nuisance and started perforating them themselves. Although this was not officially authorised, the practice was condoned by the postal authorities. This 40h has therefore a private perforation (as opposed to what is sometimes called a ministry perforation). Now it would be interesting to know whether certain private perforations can be linked to certain companies or banks! I suppose this could be done, or maybe even has been done, when enough examples have survived on cover!
Hmm, let's do some more research!
:-)
Adrian
Czechoslovakia and Poland