Skip to main content
on June 29, 2008
JACK
When I got my Czechoslovakian air mail stamps which I showed you the other day, they came with the next air mail set down the line. 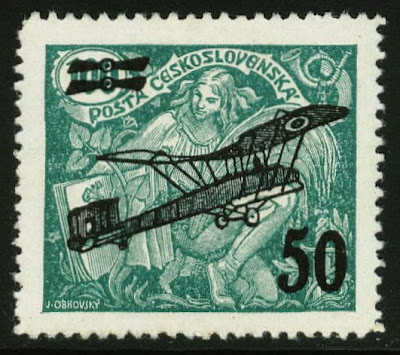 This set was issued some two years after the previous one, on 15 June 1922. As you can see, the plane itself is rather similar, but the rest of the overprint layout is different. I like the two propellers obliterating the old value! A different kind of stamp was used for the overprints, the "Allegory of Economy and Science" definitives. As far as I know these stamps were not issued for specific flights. They were reprinted in 1970 on thick paper (with facsimile on the back) so do not confuse these with the real thing! Also, forgeries exist, which may be distinguished because the shading of the plane is patchy and the jack (is that the right word for that round thingy on the wings?) is round rather than oval.
:-)
Adrian
Czechoslovakia and Poland

Anonymous said…
Hello,
Wrote your article about provisry air mail stamps. You write there: ..stamp used for the overprints, the "Allegory of Economy and Science"...
I bealive the right tranlation is "the Allegory of Farmsteading and Science". Regards Peter H
May 25, 2009 2:24 pm

Adrian said…
Peter,
Thanks for that! I only translated the German version (in Michel)which said Wissenschaft und Wirtschaft (or the other way round)
May 25, 2009 2:36 pm