Skip to main content
on June 12, 2008
ONE WILL DO
The 1923 Silver Jubilee set of the Netherlands is known for its many perforation varieties. There are in total some 12 perf combinations to collect, although not for all values and some of them are extremely rare. The fact that enormous quantities of those stamps had to be printed in a very short time led to the employment of many types of perforators.
Not only are there many perforation types to collect, there are also quite a lot of printing plates that were used, and as the plate numbers appear on the margins, there's another bulky collection for you!

(35c plate 2, perf 11.5, August 1923)
Until recently I had never come across them but lately I've been lucky enough to get two lots of plate numbers, so I'm now in the process of sorting them. What I'm hoping to find is that the sequence of plates used is consistent, chronology-wise, with the use of the various perforators. But so far I do not have enough copies to come to any conclusion yet.
Just as well, though, that these plate numbers seem to be collected (or have survived anyway) in singles or pairs, rather than the obligatory blocks of six as they do over here. A bit softer on the budget! 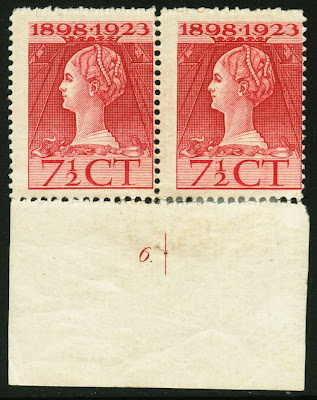