Skip to main content
on July 20, 2008
COLOURBLIND
We're doing a bit of royalty again and we're off to Greece for that today. In 1956 and 1957 two large definitive sets were issued with portraits of various Greek royalty. The sets are straightforward in that no major errors or varieties have been reported but they earn their places in our collections (well, in mine at least) because they are lovely recess-printed sets and because I have a well-publicised soft spot for royalty on stamps. This is my favourite stamp from the 1956 set. 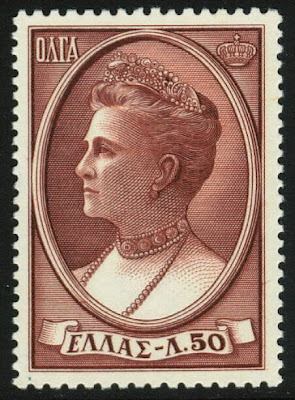 It depicts Princess Olga of Greece and Denmark (1903-1997) who went on to marry Prince Paul of Yugoslavia.
The only strange thing about this set is that it was re-issued in 1957 but in different colours. Exactly the same set with the same values and designs, but all in a different colour! 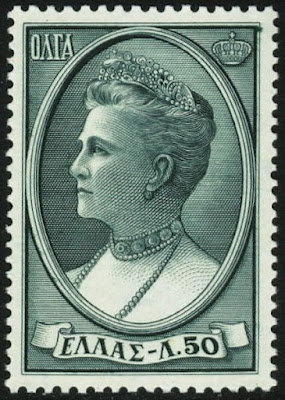 And what makes it even stranger is that according to the Hellas catalogue, the decision to issue both sets was taken before the first set was issued. In other words, it was decided beforehand to issue two identical sets in different colours! Hmm... would there be any logical reason for that, or does it smell of tapping in on the philatelic profit market?
:-)
Adrian
Balkans