When I say tidying up loose ends, that doesn't mean, of course, that I now have the answer to all my questions, but at least we're getting somewhere, although in the following case I'm not sure where yet. Remember these? 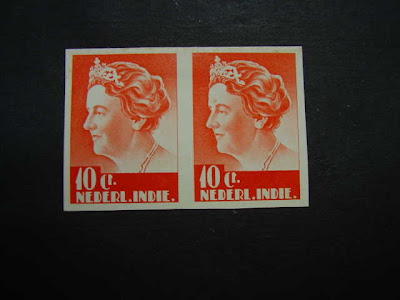 I last wrote about those here. I've since been in touch with one or two people and at the moment the situation is as follows. In 1947, the Netherlands Indies printers Kolff & Co. produced a presentational book 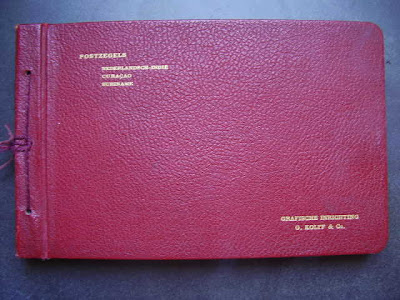 containing stamp proof material for some of their staff celebrating their jubilees. 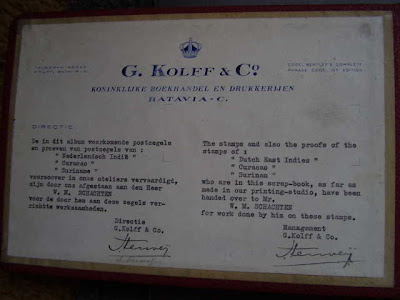 I understand that only 6 of these books were ever made. But as these books contain "stamps the staff has worked on", 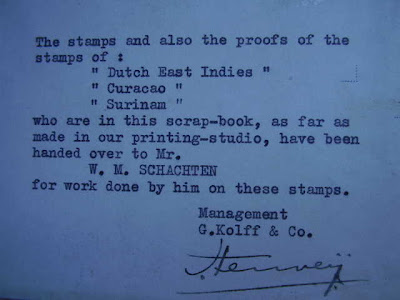 we can safely conclude that these proofs are all made by Kolff. Now, Kolff started printing stamps for the Netherlands Indies in 1941, probably because Enschedé in the Netherlands was no longe able/allowed to print those for them because of the Netherlands being occupied by the Germans. This would date the proofs in the book at round the early 1940s. This makes sense, for most Wilhelmina proofs are either of the Kreisler design (albeit slightly different) which was the then current definitive design, or of the Van Konijnenburg design which was the eventually adopted definitive design. But then we come across these: 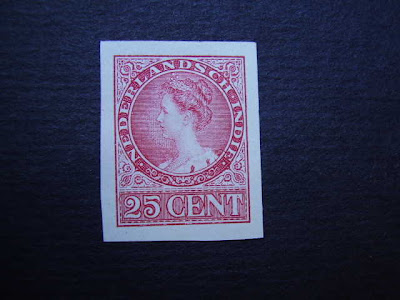 Now these are also mentioned in Van Dieten's Proof Catalogue for the Netherlands and overseas territories, but they are dated 1908! The catalogue does not mention the printer. As I said before, Kolff did not start producing stamp for the Netherlands Indies until 1941, so what were they doing in 1908 making these proofs!? And if they are theirs and made in 1908, then the Kreisler proofs may well be from an earlier date too and could still have been the original design, with the borders added later!


So my plea remains: could anyone please shed more light on this?! Hope so!


PS: All images courtesy of F. Kalf, the Netherlands.
Wilhelmina