Skip to main content
on August 18, 2008
Machins for beginners

This year, Great Britain marks the 40th anniversary of its Machin stamps, a perfect time to discuss how you could set up a collection of these stamps. And that won’t be easy if you haven’t started yet. A standard collection of all the different values and colours come to over 400 stamps! But this article is an attempt to show that you can put together a nice collection which will be a tad more interesting than just all the values from 0.5p to £5 in a row, yet without needing anything more than a magnifier. This will be done by subdividing the set into easily manageable and distinguishable groups, giving a good picture of 40 years of Machins!
The story starts in 1967. On the June 6 of that year, the first Machin stamps are issued. The stamps replace the no longer popular Wilding stamps, which were considered cluttered and dated. 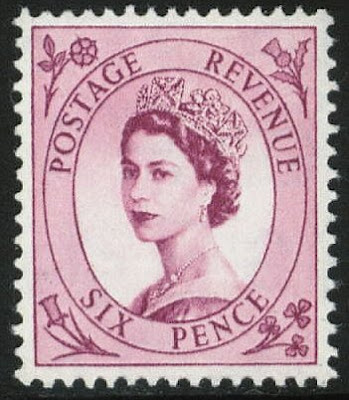 The new design is a picture of simplicity, with just the portrait of Queen Elizabeth 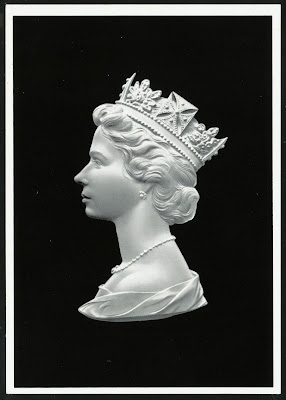 and the value.
The first group of stamps are the pre-decimal stamps, printed in photogravure. At the introduction of the Machin stamps, Great Britain had not yet switched to decimalisation. The stamps are easy to distinguish, because the penny values are indicated with a d
and the shilling values with a little "forward slash". 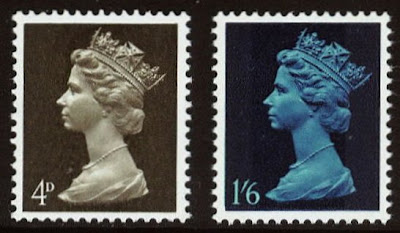 It is a relatively small group, which has its merits because you can collect stamps in sheets, 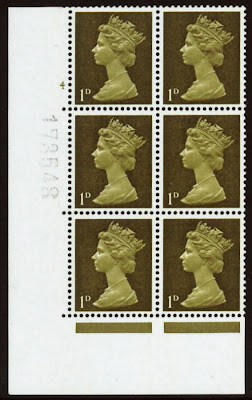 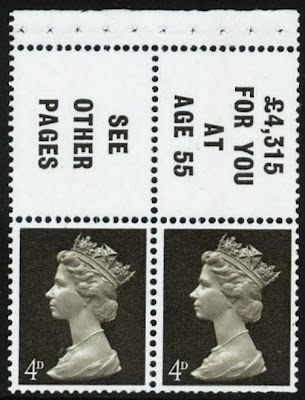 The higher values of the pre-decimal period are a separate group, because they are larger and printed in intaglio. There are only four values, but do take care that you include the right £1 stamp, the one with the elaborate pound sign.
The stamp with a more stylized pound sign belongs to the decimal group. 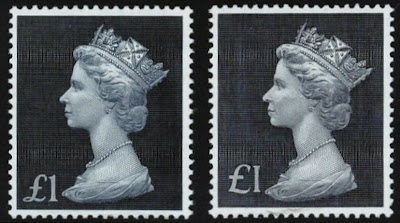 On 15 February 1971, Britain goes decimal, resulting in a whole lot of new stamps. From now on, the pence values are indicated with a p. 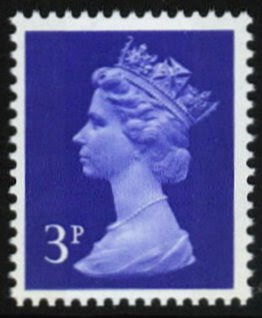 The first group of decimal stamps runs to 1983 and includes a great deal of values, as this was a period of rampant inflation.
Again, the four higher values are printed in intaglio, and this is the group in which you include the modern £1 stamp.
From 1977, a new type of high value stamp is introduced, printed in photogravure, and therefore more like the low value stamps, only in a larger format. 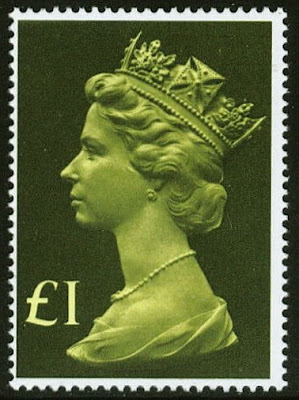 Seeing that so many new values are added and various types of stamps are being used (light head on gradated background, dark head on light background and light head on dark background)

Royal Mail decides to clean up the series. Two developments play a major role here.
The first dates from 1983 and entails the introduction of a new letter type. The bulky letter type used turned out to be problematic for large values like 19½p. 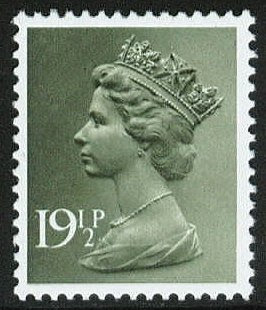 Stamp designer Jeffery Matthews was taken on board to design a new and more compact letter type. This new letter type is introduced in 1983 and is still used today. 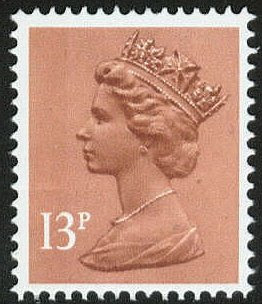 Most figures are easily recognizable, but in case of doubt, look at the recent stamps with elliptical perforations: these all have the Jeffery Matthews letter type.
The second development was to stop using all those different sub types and to create a standard stamp: a light head on a dark background, just as Arnold Machin had wanted it to be. 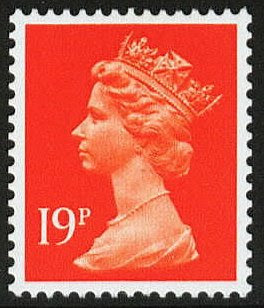 Again, Jeffery Matthews was involved. In 1988, he created a colour palette of 30 colours.
In 1999, three colours are added,

and now, to mark the series’ ruby jubilee, Jeffery Matthews created a ruby colour for the £1 stamp.

The colour palette is still in use today, so again: if in doubt, check out the stamps with elliptical perforation and find the 34 colours. Note: the stamps in black (1st),
gold (26p and 1st) and light blue (2nd) do not come from the palette, so discard those!

From 1993, things will get interesting if you’re planning to start a collection of Dutch Machins, because in that year, Enschedé obtains the contract to print the stamps, and will continue to do so until 1997. Enschedé are the printers that introduce the elliptical perforations. The Enschedé Machin head is very refined and easy to recognize once you know what to look for. Check out the following values, which have been printed by Enschedé only: 29p grey, 36p blue and 38p red.

In 1997, the contract returns to Harrison, who introduce a “new head”. This is not really a new head, but it is now computer engraved which makes it sharper and more detailed. It is the head which is still used today, even though the stamps are now printed by De La Rue. Stamps such as the 40p azure and 42p green have only been issued with this “new head”, and are therefore a good benchmark. 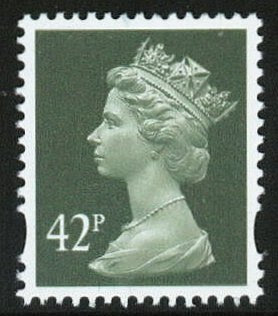 A final major development is the reintroduction of the high values. In the 1980s, the 1977 set was replaced by stamps in a different design, but in 1999, high values revert to the Machin design. The stamps are still recess-printed (engraved by Czeslaw Slania) but are now issued in small format. In 2003, the high values were printed in gravure (with shiny Iriodin ink), but nowadays they are only available via Royal Mail’s philatelic bureau. 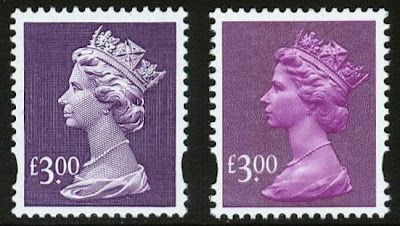 Is that it? No way, there is so much more! For starters, we have the Machin stamps from the regions: the Isle of Man, Northern Ireland, Scotland and Wales.

And once we’ve done the regions, we can go abroad, to Somaliland for example, where Machin stamps were overprinted for use there. When in 1990s Somaliland’s postal arrangements were put in place, the idea was to use British stamps with an overprint. This idea was abandoned however, for fear of Islamic lack of understanding. Therefore, new stamps were designed and printed by Harrison. These new stamps were not finished on time. An urgent need for stamps meant that the overprinted Machin stamps, which had already been printed, had to be used after all. They were withdrawn after a couple of days, after it emerged that reactions to them were indeed rather negative. Postally used stamps are now very scarce.
The Machin head also graces definitive stamps from Gibraltar 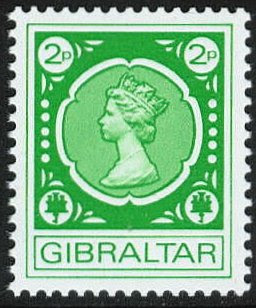 and Hong Kong. The Hong Kong set is especially interesting, because the stamps are available in sheets, 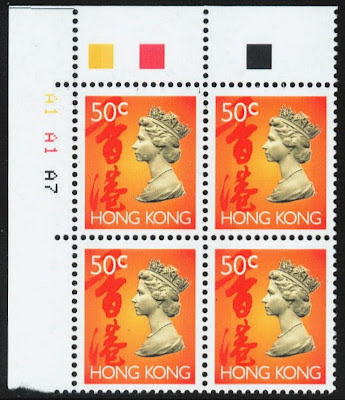 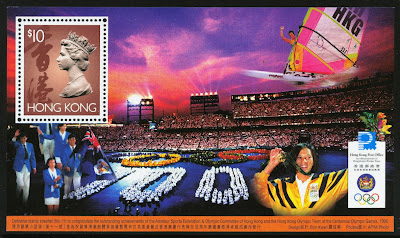 Now, when you start collecting all these stamps, you will notice that so many stamps do not fit into one of these main groups, 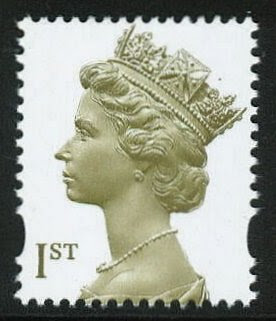 but by that time, you will have been hooked and will be eager to read, research and collect even more! And once you’ve reached that stage, you’ll be extremely busy for the rest of your life!
© 2007, AKPhilately
An edited, Dutch version of this article was published in Filatelie of July/August 2007.
Articles British Commonwealth Machins

GBStamps said…
The first Dutch-printed Machin was the 8p in 1979, and then the 18p in 1991. These were predecessors to the full range of Machins that Enschede printed in 1993.

Even though in 1997 Enschede lost the contract to print the vast majority of Machins, they have still printed some from time to time in the years since.