Skip to main content
on September 06, 2008
CLEVER CLOGS
Well, I've done some browsing on the internet, and I think I may have found the answer to the plate number problem!
I found a Glossary of terms for the collector of United States stamps, and there it says that between 1894 and 1980 plate numbers were indeed printed on the sheet margin, and plates were numbered in an ever ascending order, so no number was ever used twice, which is why the number is so large! It also said that the siderographer (how on earth would you pronounce that!?) initials are also included. Now my copy does indeed have two letters preceding the plate number so that may well be the initials of the creator of the plate, which is what a siderographer is. 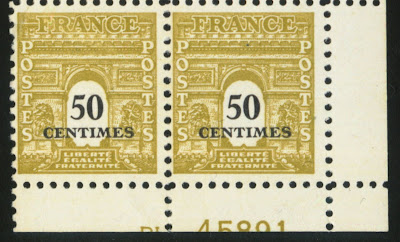 This would mean that, ideally, these should be collected in pairs. Too bad the text has been cut away on my copy. Anyway, just as on Dominique's blog: if you have any numbers and letters for me, I'd be happy to hear them, so we can establish the plate numbers and IDs for each value!
:-)
Adrian
France