Skip to main content
on October 25, 2008
CANDLELIT
Yep, the storms and gales season has decended upon us, so what do you when you spend two nights without power? Exactly, you light a few more candles and starting flicking through your all world catalogue, in search of overprinted stamps. And, as is so often the case, I ended up with Aden.
I always end up with Aden, whether it's contemplating an all world collection, or a recess-printed collection or, like now, an overprints collection. So, Aden has become a symbol for all those things I've tried and given up! Not the best of starts, I must admit! But, to be honest, the catalogue actually made me end up in Abu Dhabi, where there are a number of overprinted stamps to be found, but I haven't got anything from Abu Dhabi yet, so it had to be Aden. There's just no escaping Aden!
We start off with the basic stamp that was overprinted. 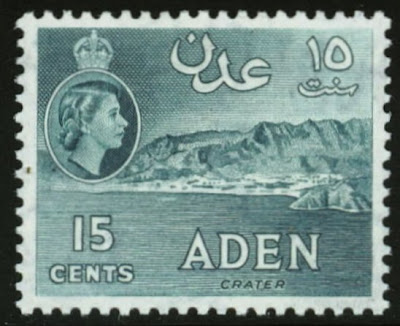 It is part of the first Elizabethan definitives issued from 1953 onwards. This actual 15c stamp was issued in 1959. It was to be overprinted that same year in Arabic. 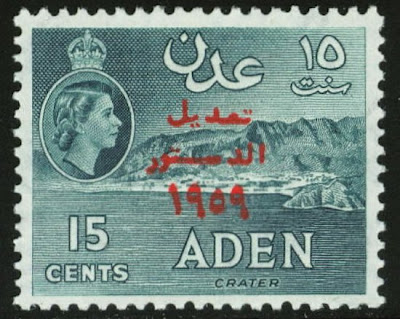 A similar thing happened to the 1s25 stamp from that same Elizabethan set (issued in 1956). 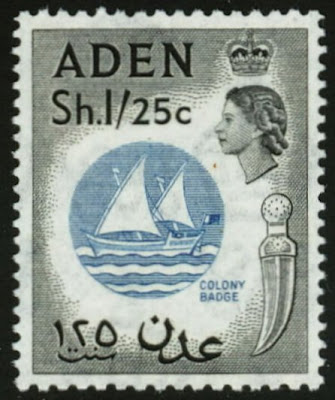 This stamp, however, received a similar overprint, but in English. It reads "Revised Constitution 1959", referring to the fact that in that year, six of the western protectorates joined into a Federation of South Arabian Emirates. 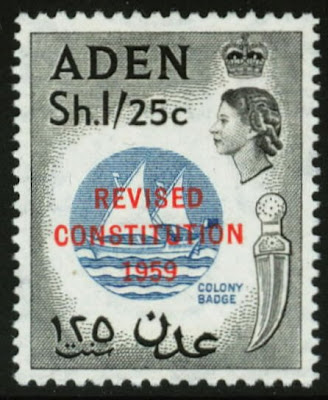 Hmm....
Would this end up on that same pile where all the other Aden attempts ended up???
:-)
Adrian
British Commonwealth

Anonymous said…
hi Adrian,
when I started collecting stamps, I first look at Aden, because it was the first country that appeared in my world catalog. I bought some examples, the cheap ones, and liked them very much because of their design and colors. I became almost automatically interested in the other Commenwealth countries.
So, indeed, Aden was my favorite.
Regards from Toon.
October 26, 2008 8:53 pm