That's what I am at the moment; with my upcoming trip to Holland. So stamps are not at the front of my mind right now. But despite a certain lack of inspiration I'm going to show you at least something today. I've been doing Italy for a while now, as you may have gathered, and this is one of those stamps I got in a batch of overprinted stamps. 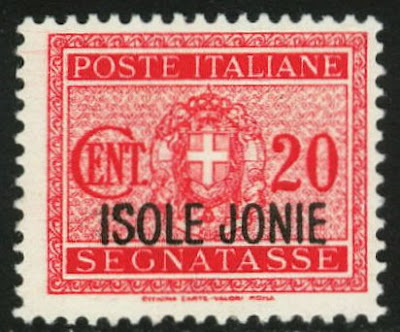 It is actually a postage due stamp of Italy, overprinted "Isole Jonie" to be used in the Ionian Islands. It would therefore fit well in my as yet imaginary overprint collection! Those Ionian Islands would be a great start for such a collection anyway, as the stamp catalogue for the islands consists of hardly anything but overprinted stamps! This stamp shown here dates from the Second World War. In that time, Greece was occupied by Bulgarian, German and Italian forces. The country was split into three administrative areas, with the Ionian Islands falling under the Italians. At the very beginning (June 1941) the Italians had the existing stocks of Greek stamps on the islands overprinted. Like this stamp, overprinted for the Ionian islands of Corfu and Paxos. 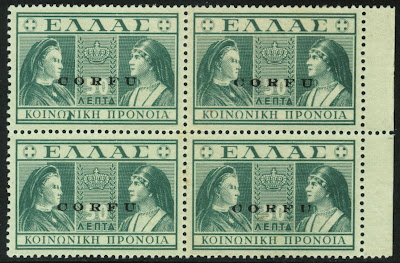 In August 1941 the Italian stamps (postage, air and postage due) with the above shown Isole Jonie overprint were ready and these replaced the Greek overprints with immediate effect. There is also a postcard with imprinted Italian stamp which received a similar overprint. These overprinted stamps were replaced in 1943 by the German overprints I showed in my last post.
I suppose, coming back to the idea of an overprint collection, that an ideal setup would be the basic stamp, the overprint and usage of the overprinted stamp on cover. The more I think about this, the more eager I become to start something like this.
:-)
Adrian