Skip to main content
on October 07, 2008
SPANISH
I didn't do too badly yesterday after all, apparently, if you read Pablo's comment! Thanks very much for that, Pablo! And yes, I know that the whole propaganda set exists of 12 stamps: three values with each the same four propaganda labels. And what's more: there are three more values with different labels that were produced but never issued. Apparently, the slogans on those labels were superseded as things didn't go as well for the Tripartite as planned. I hope to lay my hands on those, too, and will show them to you if and when I do!
Pablo has a blog of his own, which you can see here, but it is in Spanish, and my Spanish is even worse than my Italian (it is almost exclusively limited to Tengo hambre!), but it is still a nice blog to look at.
But staying with Italy for a wee while longer: it is one of those countries with a turbulent recent past, and though I pity the folk that would actually have to go through all that, philatelically speaking it makes for rich pickings!
Now, in the latter stages of World War II, the Yugoslavs occupied much of the Istrian Peninsula and had attacked Venezia Gulia. In June 1945 an agreement was signed between the Allied Forces and Yugoslavia regarding control of the area. The area including Trieste, Pola, Gorizia and the Isonzo Valley fell under the control of Britain and the US. They issued overprinted stamps from September 1945 onwards. 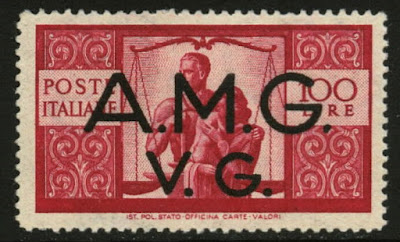 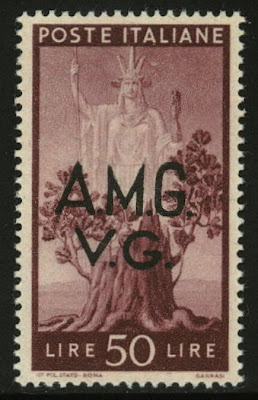 The Yugoslavs got control of Fiume, most of the Istrian peninsula and the area northeast of Trieste. They issued proper stamps, but I haven't got those, so I can't show them to you....
:-)
Adrian
Italy and Switzerland