Skip to main content
on October 26, 2008
WELL, MAYBE NOT, EH...?!
The curse of Aden striking again! I've almost given it up, but there's one last ray of hope: what if I limit myself to European overprints! With electricity back on, I didn't have to strain my eyes as much while browsing through the A section of my world collection. And I was in luck! Not a single overprint to be found for the Aland Islands! So that's one country complete in my as yet virtual overprint collection. And next up was a country of which I already had a few overprints: Alaouites! And here's one of them. Now you may with a recent amount of justification state that this is not Europe at all. After all, the Alaouites, or Alawite State, are nowadays part of Syria. But as you can see, the overprint is on a European stamp, so I would be very happy to include that in the collection. Just as I would happily include any non-European stamp overprinted for use in Europe, if there are any.
This stamp here tells the story of the Alawite State. It was part of the Ottoman Empire which fell apart after World War I. The Western powers were at that time scrambling for the leftovers. France occupied Syria and was later (1920) given the Alawite State as a mandate. At first, Syrian stamps were used by the French but as this caused administrative problems with Syria, the French decided to overprint their stamps for use in the Alaouites. The first line in Arabic actually reads "Alawite State", with the second one denoting the value. The overprinted stamps were issued in 1925. Later still (1936/37), the territory was incorporated into Syria.
Is it obvious I'm already having more fun with these than with those Aden stamps?! And what's more, I suppose these stamps would one day be included in my Peacemaking collection as well! Talking of which, there's one more thing I'd like to show you now. Has nothing to do with anything (well, there's a Sower stamp link if you like), I'm just so very happy to have got it! A cancellation from the heart of the centre: the postal services of the 1919 Peace Congress! 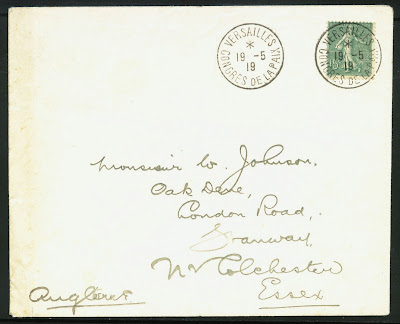 Marklaro said…
Hi! I'm also a stamp lover and I really like your blog. I put a link to your blog on my blog. Please visit it and make a comment too:
http://worldstampspostmarks.blogspot.com/
If you like it, please add my blog to your links.
October 30, 2008 5:07 pm