Skip to main content
on October 09, 2008
THE WIND IT BLOWS
Sometimes, browsing through catalogues, you come across sets you had never noticed before, have never seen in kiloware bags. That happened to me when looking at a Greek catalogue. I saw this wonderful Greek air mail set of the 1940s, depicting the eight winds.
Now, Greek mythology knows four main winds, with four lesser winds having been added later. These four winds (north, east, south and west) were each associated with seasons and weather conditions. Makes sense, doesn't it?! They were depicted in many ways, as gusts of winds, as horses or as winged men. It is in this latter form that they were depicted on the stamps. 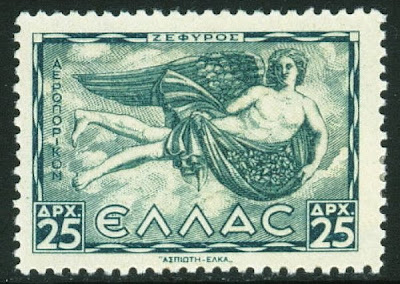 Here we have Zephyrus. This is the west wind, bringer of light spring and early summer breezes. The young man carries spring flowers with him. 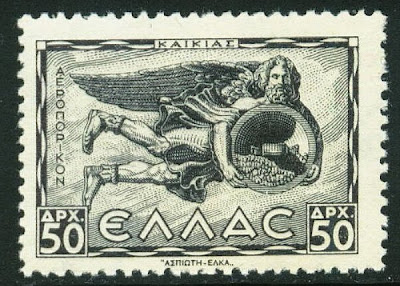 Less pleasant is Kaikias, representing the northeast wind. This bearded deity has a shield full of hail stones. His name derives from the Greek word for evil.
More winds later!
:-)
Adrian
Balkans

Just wanted to comment here - somewhat OT - and say how much I've loved finding and reading your stamp blog. I'm a half-hearted stamp collector, having inherited various collections, but have become rather more interested recently. Your blog has stoked this hobby for me! Many thanks.