Skip to main content
on November 13, 2008
Feel free
Yesterday, I received a comment from one of my more faithful readers, Toon, why I buy all this stuff (referring to the Dutch proof I showed yesterday), and why I do not just start a virtual collection with images from the internet, scans from auction catalogues, etc. His website is based on that principle and I must say it does look great and doesn't cost a penny! Have a look here. You do need to read Dutch but just looking at the pictures might be fun as well.
Well, yes, he does have a point, but there's nothing like owning one of those gems, I would say! I can very much enjoy the images in a (posh) auction catalogue, and even keep some of them when they deal with some things I will never have. I have for example a very nice auction catalogue from Karamitsos in Greece who once sold a wonderful 1896 Olympic Games collection, and I have the "Monarch Collection" auction catalogue from Spink which is more like a reference book for all sorts of wonderful GB stuff.
But to actually own (even if it's the cheapest thing you can find from one of those catalogues) one of those items may be pricey but also priceless, so, yes, I do indulge every now and then!
But, Toon, just in case you want some more virtual items for your Zeeland collection, here's a cover from a 1952 envelope. I may have shown this before, but just in case I haven't, here goes: 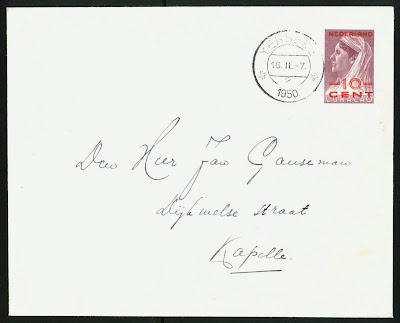 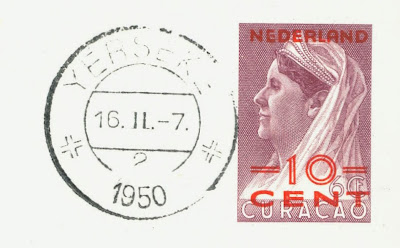 This one here is even more special for it's the earliest known date of usage for this envelope. So there!
:-)
Adrian
Wilhelmina