Skip to main content
on November 29, 2008
Getting the hang of it
I'm really not much of a cover collector, but I do every now and then see the charm of it, as a supplement to a "proper" stamp collection. And I must admit that covers sometimes do tell the story pretty efficiently. Let's, for example, have a look at my most recent addition. 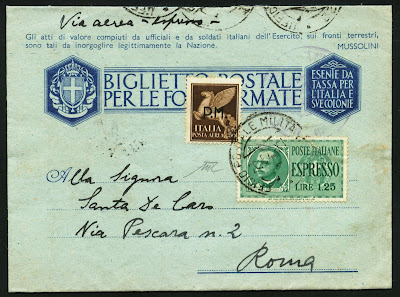 So what do we see? Well, Italy is the first thing that comes to mind. It is a military letter sheet. They were issued in I think 1942 (1943?) as part of a propaganda effort of the Italian government. The slogan at the top reads something like "the heroic deeds of the Italian soldiers at the front are the nation's pride". The letter sheets were distributed among the miltary, who could use them without having to pay postage. So why the stamps? Well, the back gives a clue. 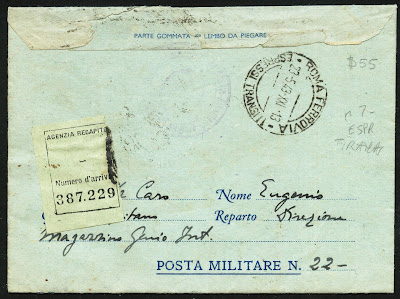 Just below the added on bit of paper you can read that the sender is a captain. Higher ranked military did not have free postage, so that's why. The PM overprint on the air mail stamp shows that the letter was sent from the front in either Albania or Greece, because the PM stamps were only available there. The write-up when I bought it, states that the letter is from Albania but so far I have not been able to conclude why. Maybe the Posta Militare N. 22 is a clue. I suppose it could be something like a field post number, and in combination with the date it should be possible to find out where this captain was stationed, but I need to look into that more thoroughly. The cancellation of the stamp reads "Ufficio Postale Militare 22", which you can make up when you look at the part cancel in the top right. I can't figure out the very faint blue cancel through the "essente..." part of the cover. It seems a similar cancel was put on the back, but just as faint.
Now, the cover was sent by airmail (hence the airmail stamp) and was also an express letter, which is why the espresso stamp was needed as well. The cover was sent on May 20, 1943 and arrived in Rome three days later, on May 23, which becomes clear from the special express transit cancel. The added on bit of paper is a proof of receipt of an express letter.
I'm going to show you the contents as well. 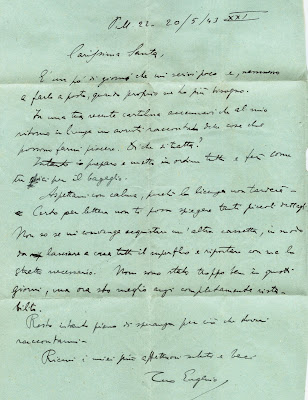 The handwriting is rather wriggly and my Italian is not good enough so I haven't had the heart yet to start deciphering it. Maybe one of you feels up to that! If you do, do let me know! I can always send a large copy. Not that I suppose there will be any (military) secrets in there. And thinking of that, maybe those faint blue cancels on both front and back may well be censor chops!
So you see, you keep on reading more and more in those covers. Feel a bit like Sherlock Holmes here!
:-)
Adrian
Italy and Switzerland