Skip to main content
on December 18, 2008
Scorching
In the early 1900s, the Dutch postal authorities were starting experiments on how to speed up the processing of mail. They were also interested in an invention by a Mr Van der Valk, who claimed to have made a machine that could not only process mail quickly but would also solve the problem of fraudulent reuse of stamps by washing off cancellations. His machine would not apply a postmark with ink but would actually burn the postmark into the stamp! Trials with this machine started in August 1901, in The Hague.
As the hours of the cancellations needed changing every hour, two cancels were made which were used in turn, because the cancels became too hot to handle, so they had to be left to cool for a while. This of course yielded two types of cancellation, which are easily identifyable. Shown here on this cover is type 2. 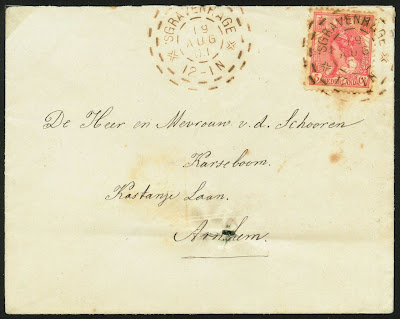 I find the best way to identify them is to look at the dashes near the S and G of 's Gravenhage. On type 1 there is a dash above the S and G, and on type 2 there is a dash above the S and another one above the G.
Now, the problem was that the machine not only burnt the postmark into the stamp but quite often damaged the envelope too and even the contents got burnt. So within a month the trial was reduced to just postcards and printed matter, as those were ususally made of thicker paper. But when it was found that other machines could cancel mail much more quickly, the trials were stopped in September 1901. With this trial period of less than two months the covers with such cancellations are now coveted items!
:-)
Adrian
Benelux