Skip to main content
on December 21, 2008
Spelling lessons
When the Italians occupied the Greek Ionian Islands during WW2, they issued stamps with various overprints in May 1941. For the islands Cephalonia and Ithaca they issued pairs of Greek stamps with the overprint "ITALIA Occupagione Militare Italiana isole Cefalonia e Itaca". Very impressive, but it should have read "Occupazione". This mistake was spotted too late, but it was rectified and within a month new stamps were issued with the correct spelling. 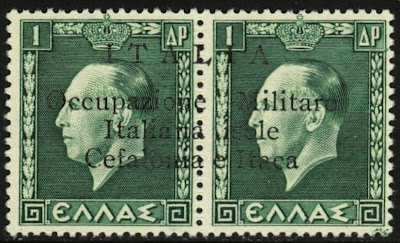 The stamps were only in circulation until the end of August of that same year, and some of them command a hefty price now. The fact that simultaneously, special overprinted stamps for Ithaca only were also issued, so that these "Cefalonia e Itaca" stamps were basically only used in Cephalonia, will have helped to push up the price too.
The fact that there was a war on plus the fact that overprints always yield nice varieties, even at the best of times, makes this an interesting area to collect, if you like that sort of thing. One of the most striking examples of these varieties are the inverted overprints. 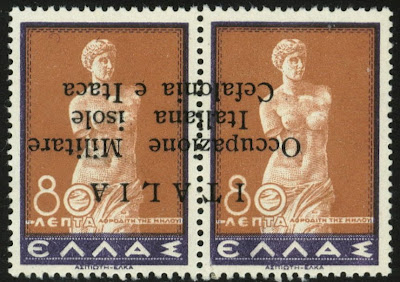 Maybe the printers took their eyes off the ball for a minute when they saw the design of this stamp!
:-)
Adrian
Balkans