Yes, I know, I've been neglecting you lot, but then, I've had so much to do! Three articles for Stamp Magazine to write, one for stamp & Coin Mart, a Dutch stamp blog which has asked me to do something on a more or less regular basis, the Machin stamp blog which is probably wondering why I never contribute, and then there's our stamp society's newsletter to write and the monthly press reports on the meetings for the local paper...

Maybe I should downscale a little? Or maybe I should just get on with it! Like I'm doing now! So here's my latest trophy: 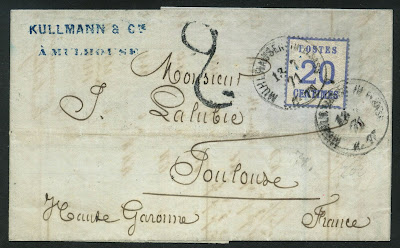 It is a cover from the erstwhile Alsace and Lorraine area. This was an area created in 1871 by the Germans after they occupied that French territory in the Franco-Prussian War. I wanted it to be part of my slightly wilting Peacemaking collection, as an example of how retribution, unjust claims and indemnities paid by the losers to the winners of a war, only work contra-productive, as in the case of France losing the abovementioned area to Germany.

The new entity created did have its own stamps for a while before German stamps were introduced. They're quite plain, as you can see, but there's a lot of varieties to collect, of which maybe more later. This actual cover was sent from Mulhouse to Toulouse on 13 July 1871. It has a German postmark "Mülhaussen im Elsass". Mail within the occupied area could be sent with a 10c stamp, but mail from the German occupied areas in France to non-German occupied French territory (as is the case with this cover) had to be prepaid with a 20c stamp. If I understand everything correctly, I believe that this only covered carriage within the occupied area. So, the recipient of this cover would have to pay an extra 20c postage. The thick curly thing is probably a tax mark, but I cannot make it out. If anyone of you would have any more information on this, then I'd love to hear it!

What you have identified as "a thick curly thing" is indeed a tax mark. It's 2. And it means 2 décimes, so 20 cts.


I hope this comment's helped you.

You are saying that Alsace and Lorraine area were created in 1871. For postal purposes, it's more 1870. (but yes officially and historically, 1871)

Germany occupied a large part of French territory as soon as 1870, and the stamps (like the one you're showing in this post) were used there.

From 09/18/1870, only this kind of stamps were officially in use. And these stamps have never been used in Germany.

Adrian said…
AdA,
Thanks very much for all the extra information! Yes, you're right of course, the stamps were issued in September 1870, at a time when Germany occupied these French territories but had not been officially ceded them. This happened in 1871 through the Treaty of Frankfurt.
I could have known about the décimes as I was told about those only last Friday! But I kept on seeing an 8 rather than a 2 which is why I never made the link. Thanks for that! I understand that sometimes people in the Alsace and Lorraine area could buy both these German stamps and French 20c stamps, to prepay both legs of the mail's journey, but apparently those type of covers are rather rare.
And as far as the labelling is concerned: I've decided a little while ago to adhere to the categorization made up for the Stanley Gibbons catalogues. They list these Alsace & Lorraine issues in their "Germany" catalogue, part 7, which is why I chose that label. But to show that I'm not a measerly old miser, I've now also added France as label.
:-)
Thanks again AdA, for your much appreciated help!
December 14, 2008 9:38 am

As for putting German and French stamps on the cover (to pay the journey in Alsace-Lorraine, and to prepay it in France), I don't say it doesn't exist, but it is, at the very least, extremely rare. From 1870 to 1872, Germany and France hadn't agreed on a postal treaty.
So they weren't accepting any pre-payment if it was made on either territory.

And well, about Germany and France labels, I didn't know about Stanley Gibbons classifying them under Germany. I use either Dallay (now Maury) or Scott, both of them classify Alsace-Lorraine in France ;-)