Skip to main content
on January 03, 2009
But not out with the old!
That's right. I may sometime rave about newer issues that I like but my heart still lies with the older stuff. I'm still working (very slowly, but still) on completing the older Dutch years, and was therefore pleased to win a couple of lots in the auction of the ASNP. Among them were two child welfare sets that were issued in the late twenties / early thirties. The idea of child welfare stamps stems from the early 1920s. The annual sets started off depicting the coats of arms of the various Dutch provinces, but when the postal authorities ran out of provinces, the powers that be wondered what to do next. There were basically two camps: one camp wanted portraits of famous Dutch people and the other camp thought designs had to be fresh and original each year and be linked to the charities that were to profit fom the sale of the stamps. In 1928 the portrait people won and a set of four with famous Dutch men duly appeared on December 10. Among those portrayed was Christiaan Huygens, which I find the best of the lot, designwise. 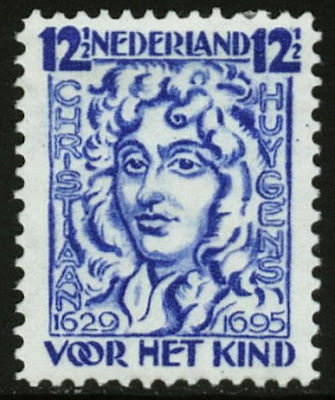 Huygens was a well-known mathematician, astronomer, horologist and physicist. He is known for lots of things I wouldn't have a clue of how to explain them to you, but (and this is easy) he is also known for discovering the first of Saturn's moons, now known as Titan.
I suppose the stamps weren't that much of a success, for eventually, the portrait people lost out to the other camp for good. The concept of portraits was revived however, when in the 1930s annual charity stamps for cultural and social relief funds were introduced. But the child welfare stamps went for more child-oriented themes and haven't looked back since. Here is a lovely example of one of the 1930 child welfare stamps. 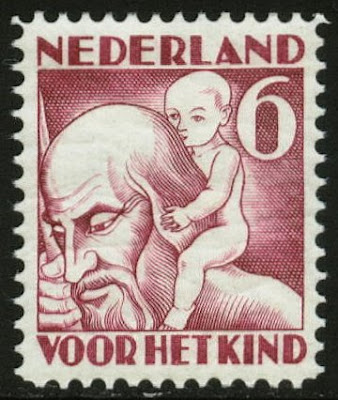 It depicts St Christopher. According to legend, he was an 18ft tall giant who wanted to serve the greatest king of them all. So he went to serve the King of Canaan. He subsequently noticed that the king was afraid of the devil and so the giant went in search of the devil. But when he found out that the devil was afraid of Christ, the giant went to find Christ. He met a hermit who told him to help people cross a very deep and dangerous river, as that would certainly please Christ. And so he did and, being a giant, did not have much trouble in ferrying the people over. Until, one day, a small child asked to be carried across the treacherous water. The giant put the babe on his houlder and started crossing the river. But the child became heavier and heavier and in the end the giant was up to his shoulder in the raging waters. When safely across, the giant said: my goodness, it felt like I had to carry the whole world upon my shoulders! Whereupon the child said: so you did and also him who made it. Whereupon the child turned out to be Christ who there and then baptized the giant and named him Saint Christopher, the Christ-bearer.
Well, isn't that a warm story to start your weekend on?
:-)
Adrian
Benelux