Skip to main content
on January 18, 2009
Tricky
I've been concentrating on the Ionian islands, lately, and I have to say that the more I delve into it, the less I know what I'm doing! It's a rather complicated and tricky business, I must say! Especially the period of the second Italian occupation, during WW2. There are various overprints on Greek stamps for a number of islands. There are for example a number of issues overprinted for use on the islands of Cephalonia and Ithaca. The first of these overprints included the word "occupagione", which was later rectified to "occupazione". Now that's straight enough. But it goes on! Other differences are that some overprints read "isole" (ie islands), whereas others read "isola" (ie island). 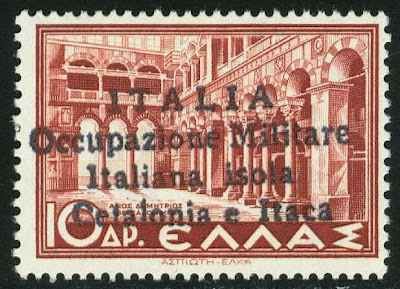 And then there's the strange fact that the overprints starting with the word "Italia" were originally meant for both Cephalonia and Ithaca (including both names in the overprint), but that almost immediately after, overprints were made for Ithaca only, omitting the word "Italia" but still including the names of both Cephalonia and Ithaca. Sigh.
And then you try and make sense of what the catalogues tell you: that's a real nightmare. The various catalogues do not seem to agree on the status of the various overprints. The Greek Hellas catalogue, for example, gives full catalogue status to the isola overprint, the Italian Sassone catalogue distinguish two types of isola overprint. The machine printed version is seen as a print fault, whereas the thicker, hand-applied version, like my copy above, is seen as a proper issue. I suppose these latter could have been made for Cephalonia only, but then why leave the name Ithaca on them? The British Stanley Gibbons just adds its favourite excuse for cannot be bovvered looking into it: "all these are rare and outside the scope of this catalogue".
And when you then still persist with the whole thing and you start looking at eBay, you'll be surprised to see how much of it is offered and that prices are often nothing like what the catalogues tell you (and even the different catalogues quote enormous price differences), so I suppose rule number 1 is: stick to the reliable dealers/auction houses, rule number 2: if you do go onto eBay, make sure there has been at least some sort of authentication process for the stamp and rule number 3: if it seems too good to be true, it probably is! But that still leaves me with near empty album pages!
:-)
Adrian
PS: oh yes, and may I add that on top of all this, all overprints have been forged as well! maybe I should go back to just collecting birdies on stamps!
Balkans