Skip to main content
on February 01, 2009
Closer to home
You may have noticed that my Peacemaking collection isn't going anywhere fast. And you're right, it isn't. I'm not very happy with what I've been doing so far, so I've shelved that project for a wee while. I need some more time to work out what it is exactly that I want with it. But I still like the overall idea of setting up a collection of post WW1 material, so it'll definitely be back on the cards someday. But for this year (and maybe the following two as well) I thought I'd stay closer at home, both time- and subject-wise, and concentrate on the Scottish definitives. A proper stamp collection! Which is what I always like doing best.
There are three main definitive sets that were issued in Scotland. Since 1999 we have the pictorial definitives, also known as emblem definitives. These consist of four designs (saltire, lion, thistle and tartan) used for various values. As it's the most recent one I've got that one mostly complete, so I'm not doing much work on that one.
Before the pictorials we had the Scottish Machins, which were introduced in 1971. It will be an enormous task to get this one complete, with lots of rare blocks to try and find. I've hardly got anything, apart from a selection of single stamps, so I thought I'd postpone this one a bit, and concentrate first on the first definitive set issued for Scotland: the Scottish Wildings!
These were introduced in 1958, and they were the reason why in the whole of Britain a new watermark was introduced. The existing watermark had E2R in it, and since Queen Elizabeth may be the second of England, she is only the first of Scotland (the other Elizabeth I was only Queen of England, as "we" had Mary Queen of Scots). The new watermark just featured crowns.
Three designs were used for this set, with the one by Gordon F. Huntly being used the most often. It shows the well-known Wilding portrait (also used on the national definitives), and also includes a crowned saltire and a crowned thistle. It was used for the 3d, 4d and 5d. But as there were a number of colour changes of the 4d, there are five basic stamps to collect (of the nine in total). It seems strange to have so many colour changs in the one value in a relatively short period (1966-1969), but there is a logical explanation. The 4d started out as an ultramarine stamp, introduced on 7 February 1966. 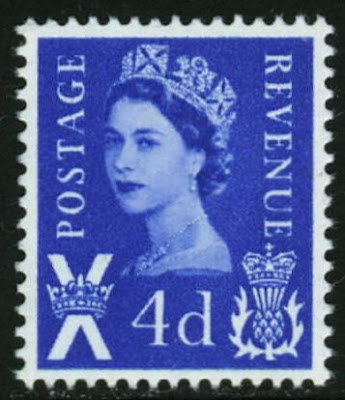 The colour was a logical one as it had the same colour as the national Wilding stamp. But then the national Wildings were replaced with the Machin stamps. For the 4d, which by then was the inland letter rate, the Queen wanted a colour that echoed the Penny Black. Black itself was regarded too dark a colour, which would lead to difficulties in being able to read the postmarks. So an olive-sepia colour was chosen. Naturally, even though the Machin design was not yet introduced in Scotland, the 4d there had to follow suit and was therefore duly issued in olive-sepia, on 4 September 1968. 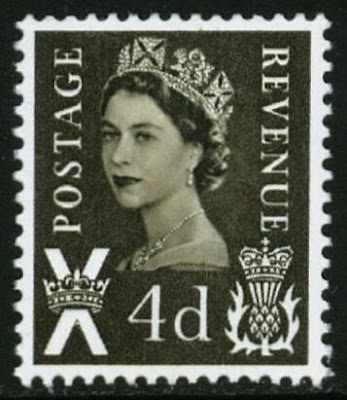 However, even olive-sepia proved to be too dark a colour for such a widely used stamp, so the national stamp was changed to bright vermilion, and again the Scottish version had to follow suit, and was also introduced in that colour, on 26-02-1969. 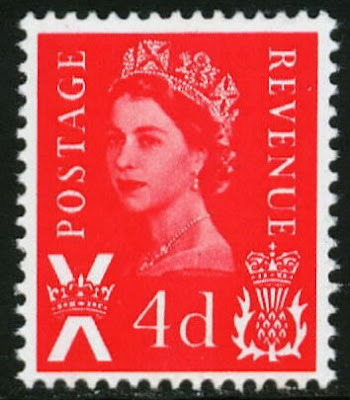 Mr Huntly, by the way, did go on to also design the 1966 Robert Burns stamps!
:-)
Adrian
British Commonwealth