Skip to main content
on February 03, 2009
Louis Pasche
Remember these? 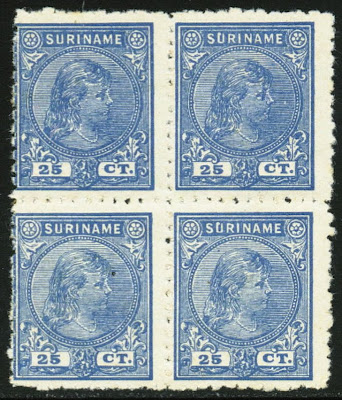 I featured these forgeries on my blog before. Yesterday I got an e-mail from Jan Verster from the US saying it was probably a Louis Pasche forgery. A typical characteristic of this forgery is that the two coloured frame lines are connected in the bottom right-hand corner. And so they are!
So I did a little googling and ended up on a Finnish forgery site. There I found another example of this forgery which resembled my copies. The site also featured a letter from this Louis Pasche (a Swiss based dealer) in which he not only offers his own stamp products but also his ability to repair stamps invisibly! 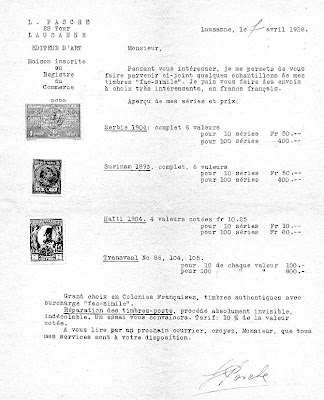 (image courtesy of G. Kock)
Mr Kock also confirmed that the Pasche forgeries were definitely the most common version of the forgeries in circulation.
The only question mark remaining therefore is: why are some of these offered as Moesman reprints? Did Moesman make any reprints at all of these stamps? Or is this just a mix-up?
Apparently, a Stamp Forgery Guide is in the planning for later this year. That would be ideal, I think, because it is often so very hard to find information about these forged stamps!
:-)
Adrian
Wilhelmina

Anonymous said…
That filatelia.fi seems like a great resource. Though I'm finnish collector, even I didn't know about that site. Thanks.
February 05, 2009 7:21 pm