Skip to main content
on March 20, 2009
Commotion
Machin land has been thrown into a commotion with the latest Royal Mail Bulletin! It depicts both the national Machin stamps as the regional pictorial stamps as being self-adhesive! Very convincing images are being shown of cylinder blocks with the stamps on. Here's the cylinder block for the 56p stamp for Scotland. 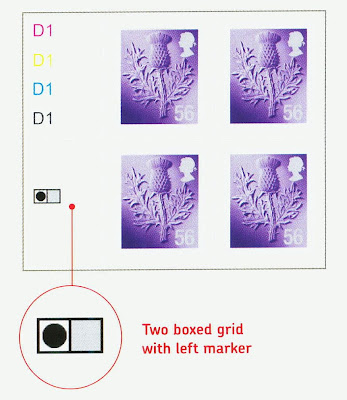 Compare that with the actual 48p stamp. 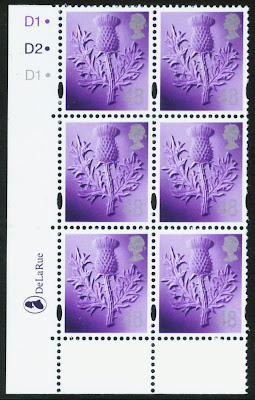 As you can see there are a whole new set of colour cylinders used, and the standard blocks have been reduced to four stamps. Which would make sense as the printer's logo has disappeared. The dot after the cylinder numbers has now been changed into a traffic light box with the dot either at left or right, denoting the left or right pane from the cylinder. Cylinder panes consist of two post office sheets of each 200 stamps. The original sheets of 400 are cut in two and then delivered to the various post offices. Up to now the cylinder numbers were printed wither with or without a dot, thereby distinguishing the left and righthand panes.
Now the bulletin is known to have been horribly wrong before so apart from the new traffic light box and the disppearance of the printer's logo I don't think there'll be any of the changes as shown in it. Although I wouldn't mind a change to blocks of four, it's easier on the wallet! As is the fact that for some of the regionals, various stamps were printed on one cylinder, for example the 56p Scotland is allegedly is printed together with the 90p Wales. This means that there is only one cylinder block to collect, which again saves us a bit of money! Thank you Royal Mail!
:-)
Adrian
PS: As I'm writing this, information has come to hand that indeed the cylinder blocks will very much be like the old ones, with the traffic light thingie in place of the printer's logo and the cylinder numbers where they've always been. Do go and have a look at the Machin Mania and the Norvic Philatelics blogs in the list at the left.
British Commonwealth

Machin Man said…
Although we know (from stamps already issued to key account customers)these stamp sheets are incorrect formats at this time.

They indicate as the previous De La Rue issues that they are self adhesives.

It, MAY, be possible that RM are showing us what will be the sheet markings of NEAR future issues.

Anonymous said…
For me it is clear that RoyalMail wanted to improve the appearance of the Queen's Head. In the newer version, this is indeed sharper by changed colors. The Traffic Lights confirm this theory.
March 20, 2009 3:44 pm

Ian - Norvic said…
It's not clear which stamps toom is referring to, but as far as I can see there is no difference in the head on any of the country stamps. They all seem to be exactly the same as the previous versions.

As some are silver this is not a surprise, but those which are reversed out in white show no real diffeence.
March 20, 2009 5:12 pm