Skip to main content
on March 22, 2009
Mamma Mia!
I left you dangling in Greece before I had to divert my attention to current matters here in GB, but I'm now taking you back from this sceptered isle to the island of Hydra, back to Greece. For not only have I just started on those postage due stamps (a project of at least a couple of years, so don't expect too much news on that in the short run!), but I've also started collecting the 1942 Greek landscapes definitives, and these take priority over a lot of other things so I might be reporting on those fairly regularly from now on.
It is a fairly basic set of 18 stamps which, even mint, won't cost you the earth (less than a fiver whether in euros or pounds!). The set is also known as the "Occupation" set, as it was issued during the time that Greece was occupied by the Germans. I have yet to find out whether the Germans had any involvement in this set or whether it was a Greek-only venture. The fact that it is a war set makes it more interesting than many other sets. There are countless overprints which together chart the end of the war for Greece. From charity overprints for war orphans and bombardment funds to celebrating territories that were liberated. Bound to be fascinating stuff!
So far, I have only the one item! I know, but like I said, I've only just started and will amend this situation later next month (will be away for a while so it'll have to wait). It is very nice though, for it is a block of four stamps of the 25dr, with double printing. 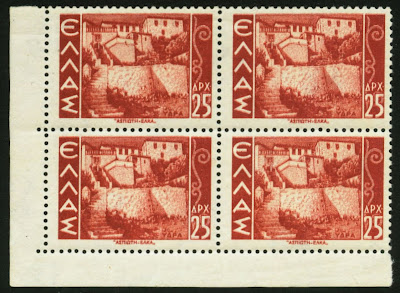 The stamp shows houses on the island of Hydra, and I was reminded immediately of the film, but let's not go there! Sometimes, double printings can be hard to distinguish, especially when the two printings are close together and all you get is a slightly fuzzy picture. It always pays to look closer at letters or numerals of values. Quite often it is there where you see the effect of double printing at its best. On this particular stamp, you can see it when looking at the bottom of the 25.

Anyway, that's me for a while, but I'll be back with more!
:-)
Adrian
Balkans