Skip to main content
on March 14, 2009
Postage Dues
Postage Due sets often get neglected by stamp collectors. They're considered dull in design and not very interesting to collect, unless you're a cover collector in which case you might collect them properly used on cover. But the Greek postage dues from the early 20th century form a welcome exception. They are as versatile as a proper long-running definitive set, which is why I've just embarked on them. I just received my first three items, which I will show you here.
We're dealing with the postage due set that was introduced in 1902. It is known as the "London" issue, as the stamps were printed in London, by Perkins, Bacon & Co. My first stamp dates from a little later, from 1912, and bears the overprint "Hellenic Administration". 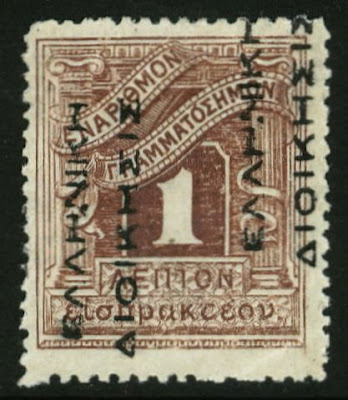 This overprint was applied because of the First Balkan War. Territories liberated by Greece came under Greek military administration, and stamps used in these areas got this particular overprint. This copy shown here has the double overprint variety.
My second item is an unoverprinted stamp from 1926. This stamp is part of the lithographed set, issued from 1913 onwards (earlier issues were mostly printed in recess). 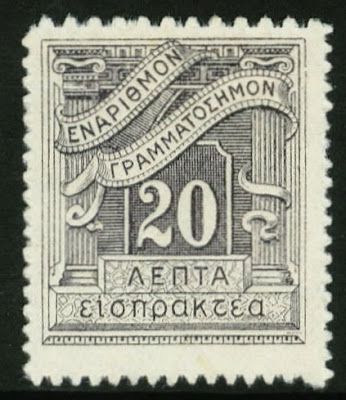 There are five different print runs to distinguish, and this is a stamp from print run 4 (1926). It is easily recognisable because it is the only print run without an accent on the first 'o' of the word starting with "rpammato" in the banners at the top. Apart from the five print runs, we have seven varieties to look out for (I told you it was intriguing!), and this stamp has variety b, which is a 10.5 perf at top (rather than the 13.25 on all other sides).
My final stamp for today dates from 1935, and sees the postage due changed into a normal postage stamp. 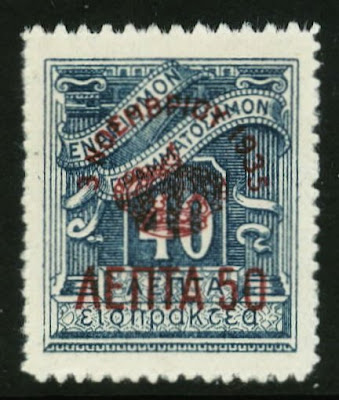 A referendum held in 1935 whether the monarchy should be restored, went heavily in favour of restoration of the monarchy (although the fairness of the outcome has been called into question). Various stamps were overprinted with the date of the referendum (03-11-1935) and a crown. Again, we have varieties to look out for, and this particular specimen has, just like the copy above, a perf 10.5 at top.
So there, with just three items a whole world of history and philately has opened up for you!
:-)
Adrian
Balkans