Skip to main content
on March 03, 2009
Sem Hartz
Sem Hartz was a prolific designer and engraver who has had some 80+ designs printed since the 1930s. He was hired by Enschedé but did not just do work on Dutch stamps. He also designed/engraved stamps for Luxembourg, Belgian Congo, Mauritius and other countries.
The man was quite opinionated about the art of stamp design/engraving and as a result rather pleased with his own work. He also very much preferred engraved stamps to stamps produced in other ways such as photogravure.
His mantrum being that the closer you look at photogravure or letterpress produced stamps the less you see because the image just disintegrates into coloured dots, whereas engraved stamps, if done properly, invite you to take a closer look. Like stepping into the image and that image being able to withhold the pressure and remain recognizable as an image rather than morphing into an accumulation of colours. If you can still follow me that is.
Well, I agree with him as far as engraved stamps are produced. I would happily trade in everything I have for a collection of beautifully engraved stamps! So I was very happy to find a Sem Hartz stamp among the many rubbishy stamps in our latest club packet. 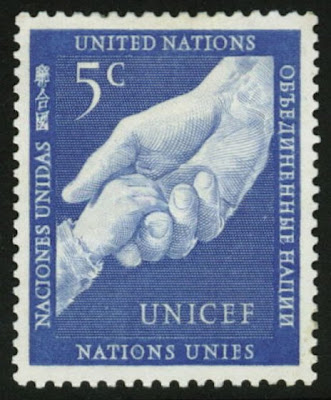 It is a stamp from the very first definitive set for the United Nations, issued in 1951. Isn't it a beauty?!
:-)
Adrian
United States

Paul Razzell said…
Have you seen Michael Russem's collection of stamps designed by type designers? It is the definitive collection. Many by Hartz. See http://www.katranpress.com/stamps_about.html
April 10, 2009 3:59 pm