Skip to main content
on April 20, 2009
Scottish Congress
I've just come back from the philatelic congress in Perth, Scotland (yes, I know, I'm on the go at the moment and there's more, albeit non-philatelic, to come, so my writing schedule may be a bit erratic until next month) where I've had a lovely time, meeting old friends, meeting dealers, wonderful competition displays (always tempted to have a go myself but just as many times postpone the act) and just great fun altogether. A nice little extra was that this year there was a lovely postcard included within the programme brochure. 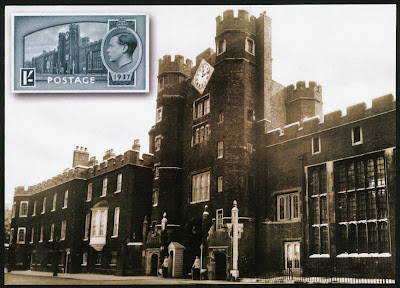 The card depicts an unadopted essay for the King Edward VIII Coronation stamps. The stamp and card show St James's Palace. The stamps were eventually never issued, as the King abdicated before the coronation ceremonies had taken place.
An important part of Congres is the annual Tom Rielly display. Tom was a very important philatelist in Scotland who was a founder member of many still existing philatelic societies. In his honour, the annual display was named after him and his daughter is still present every year to hand out the Tom Rielly medal to whoever gives the display that year. This year, our very own Peter Westwood gave the display. The display was extra special as it was centred on Robert burns, the Scottish poet whose 250th birth anniversary is marked this year. The Burns collection was the last bit of Tom Rielly's collection that had not yet been sold. It was the last chance we could ever see a complete collection of Rielly's as the Burns collection will be sold (or I believe has already been sold) immediately after Congress. Our Peter, who is a Burns expert, had also made his own cover for Congress. 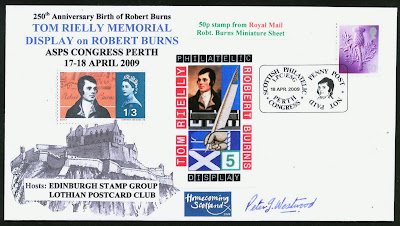 As you can see, the cover marks both Rielly and Burns. The stamp is from the Robert Burns miniature sheet that was issued earlier this year and the label in the middle is made up of unadopted designs for the 1966 Robert Burns issue. The postmark is the official postmark for the congress, and the cover is signed by Peter himself.
Maybe this should be the start of my own Burns collection?
:-)
Adrian
British Commonwealth

Philatino said…
Hi! You have a beautifull blog! Congratulations for that!!
I have a philatelic blog too, it's http://philatino.blogspot.com
If you agree, we can exchange links
I also have a page, if you're interested in philatelic auctions..
http://www.philatino.com
the auctions are renewed constantly and if what you're searching isn't on the air, you can check on the store section or it will be on the air soon.
Please, answer to my email philatinonews1@uolsinectis.com.ar
Thanks!!
Ana Galanzovski.
April 21, 2009 9:04 pm