Skip to main content
on April 09, 2009
Tour of Europe (I)
Hi everybody, I'm back from my wanderings through Europe! It's good to be back home in the rain and gales from Bonnie Scotland! Had a great time, both stampwise and non-stampwise, and will show you the results here during the coming days.
My first stamp stop was Zurich, Switzerland. Lovely city! And as it happened, a stamp fair was organised in the weekend I was there, so I was lucky! Bit scary though, to try and understand those dealers speaking "Swiss-German", and try and make myself understood in my "school-German" but we all managed somehow! I have two major Swiss sets that I collect and I was able to get some items from both. The first set is the 1934-48 Landscapes set. The one and final subset that was still missing from my collection was the Société des Nations overprint on stamps with grilled gum. These were only available in used condition to collectors, back then and now, although I believe that some mint copies are floating around, at a price! Anyway, I managed to get a nice set used, so was very pleased. 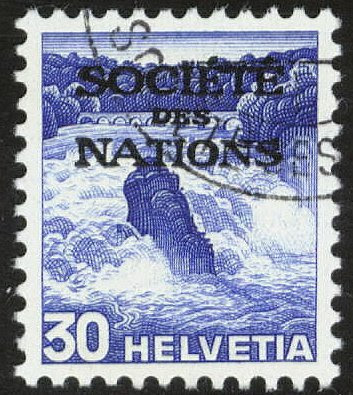 This is the 30c of that set, depicting the Rheinfall at Schaffhausen. We actually tried to go there on our way to Zurich but due to the many roadworks we couldn't find our way there so had to give it a miss.
Another nice item that I got was a plate flaw on the 20c depicting the Gotthardbahn. It consists of a red scratch on the right hand side of the stamp, continuing in the margin. 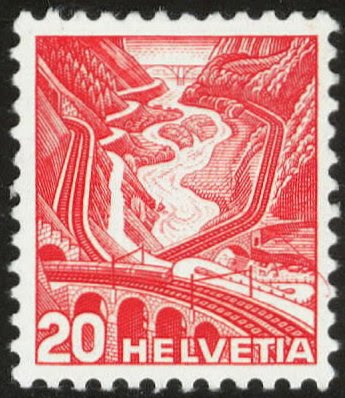 The other set I'm collecting is the Helvetia with Sword set that was introduced in 1908. I've only started recently on that one so there were still many basic stamps to hunt down, of which I got a few. I was quite pleased to get the two blue 40c stamps. These aren't shades but two deliberate colour choices. The greenish blue stamp was issued in 1921, 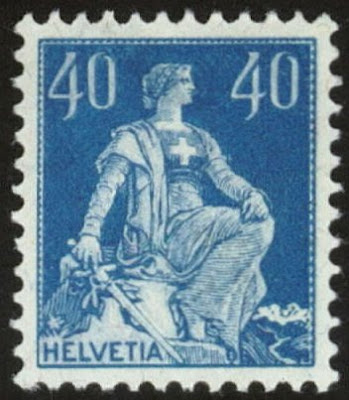 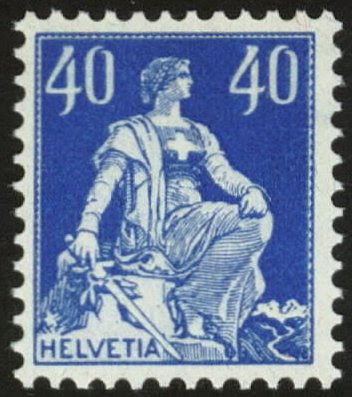 If you compare the two, you can see that the blue stamp is printed from a new engraving. The swiss cross is larger and the shading is less subtle and sometimes even nonexistent. Blue stamps from the earlier engraving exist too, although not in large numbers, so there's another variety for me to hunt down next time I'm there!
:-)
Adrian
Italy and Switzerland

Good to know you're having a great time! And I think it's great that you have some missing items. I will follow your trip next days/weeks... Welcome back!
April 10, 2009 5:56 pm