Skip to main content
on May 25, 2009
More questions
There was another item among the Wilhelmina lot that leaves me slightly baffled. It is the 1g value of the 1923 Silver Jubilee set for Surinam. 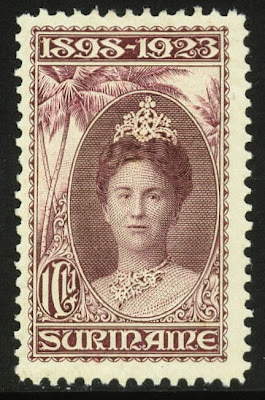 A lovely recess-printed stamp. Now this value comes in line perf 11 only, but four stamps out of the set of seven come with different perforations, varying from perf 11 and perf 11x11.5 to perf 11.5. Now I understand when definitives come in different perfs, seeing that they are usually reprinted several times during their lifetime. But this is a one-off commemorative set. So why the different perfs?
Well, I think I found the answer to that myself! You see, I'm at the moment working on mounting my Dutch silver jubilee issue. That commemorative set was unexpectedly turned into a provisional definitive set, which meant that an enormous amount of sheets had to be printed and perforated in a very short period of time. In order to be able to do that, Enschedé had to use all sorts of perforating machines, which led to more than ten different perfs for this set. Now I presume that the Surinam set was printed at around the same time (also by Enschedé) so I suppose Enschedé had to use any available perforating machine they could, which may have led to the variety in perfs here. Sounds reasonable, doesn't it?! But I would like it confirmed, please, if anyone know.
And talking of the Dutch silver jubilee set, the Dutch have issued a miniature sheet last month to mark the birth centenary of Queen Juliana. The stamp on that sheet depicts her and her mother Wilhelmina and daughter Beatrix (three generations of Dutch queens) and the portraits used are from earlier stamp issues. The Wilhelmina portrait is that of the Dutch jubilee set! 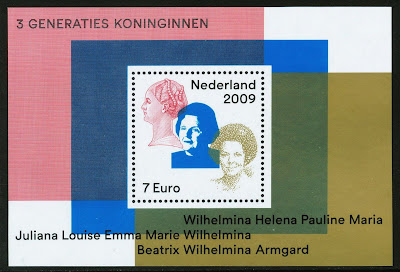