Skip to main content
on May 30, 2009
Postmarks
You will have noticed by now that I have revived my Wilhelmina collection! I'm in the process of remounting the whole thing in such a way that I'm happier with it and feel more inclined to keep on collecting. One new angle on the collection will be postmarks. I've started with the "Hangend Haar" definitives, the first ever Wilhelmina definitives. They're also known as "Young Princess" definitives and I've even seen them called "Goldielocks", because of the freeflowing hairdo, I suppose! Those definitives were around from 1892 to 1899, which means that most 19th century Dutch postmarks may be found on those stamps, so that makes for a nice side collection. This is my most recent addition: 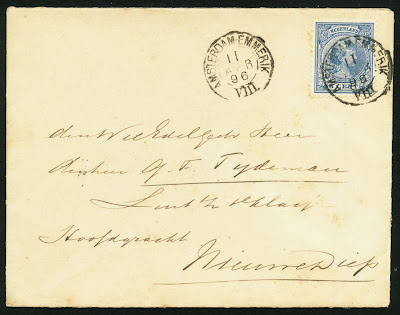 This is a small circular postmark for mail carried by train. It was introduced in July 1872 and kept in use until the turn of the century. It mentions the route (Amsterdam-Emmerik) and the Roman figures indicate the mail was carried on the outward route, so this letter went from Amsterdam to Emmerik. The return route would have been indicated with a letter, so I'll need one of those covers, too, to tell the whole story!
I suppose you could say this is a TPO mark (travelling post office) but I'm not 100% sure whether the mail was actually cancelled on board the train. But I'm sure somebody out there will know! And yes, I know I should join Po&Po. Just give me a little time!
:-)
Adrian
Wilhelmina