Skip to main content
on August 22, 2009
Party time
In 1948, the Czechoslovakians were preparing a party to mark the 30th anniversary of their country and also the 30th anniversary of their first stamp issue: the Hradcany definitives.
I'm not sure of the exact story, so correct me if I'm wrong, but I believe the idea for the latter was initially to re-issue the 5h yellow-green. Proof printings were made with the original printing plate, on paper without gum. I recently managed to get hold of a nice block of those. 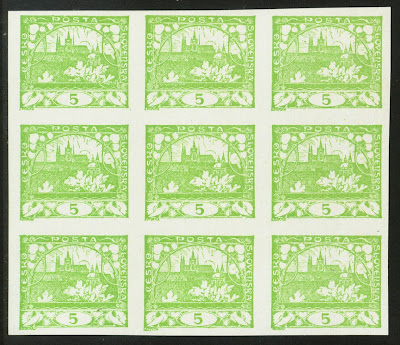 I don't know why this issue never happened. It couldn't have been because the 5 haleru was no longer a value which could be used for any postage rate, because the Hradcany stamps show no denomination, so the stamp could easily have been used as a 5 koruna stamp, a value which was still current at the time and often included in stamp sets.
But anyway, somebody must have changed their mind for what was eventually issued was a miniature sheet with a reprint of a Hradcany stamp, the dates 1918-1948, and the sentence "Thirty years of Czechoslovakian postage stamps". 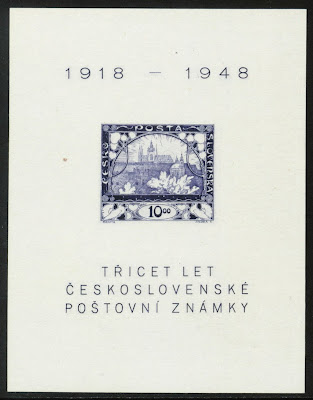 The stamp value has extra zeros to indicate this is a koruna value. As you can see from the 5h stamp block, the original stamps only had a large figure denoting the value in haleru. The sheet was issued on 18 December 1948, 30 years to the day after the first Hradcany stamps were issued!
:-)
Adrian
Czechoslovakia and Poland

toon said…
on the 5 haleru stamp you see the SUN behind the Hradzany castle. this is not possible according to the rules of nature, so the design was changed with a leaving-out of the sun. for an extensive descriptions of the two versions see a catalogue of Hungary stamps.
August 22, 2009 2:21 pm