Skip to main content
on September 24, 2009
The Narrowing of the Waters
2008 marked the 400th anniversary of the foundation of the City of Québec. The Canadian and French postal authorities marked this with a joint stamp issue in May 2008. A hundred years before, Canada Post went it alone and released a still very popular set of eight stamps to mark the city’s tercentenary.
In March 1908, the Canadian government proposed to issue a set of stamps based upon the history of Québec, including historic scenes and non-royal persons. For this, permission was needed from King Edward VII, who consented when asked. The King does, however, take his rightful place on one value; the 2c carmine shows him together with Queen Alexandra. 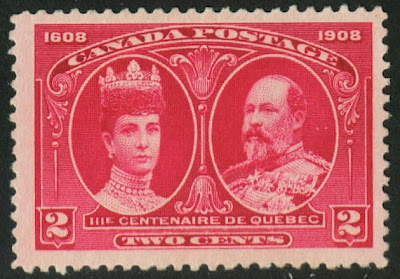 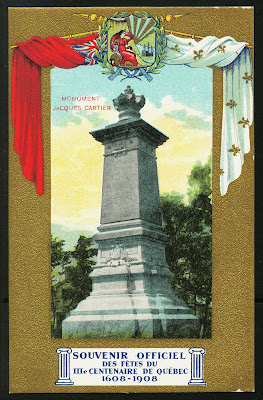 His second expedition, in 1535, saw him ending up with three vessels on the future site of Québec. This was near Cape Diamond, on a narrow stretch of water where the St Charles River flows into the St Laurens River. His three vessels are shown on the 20c dull brown. 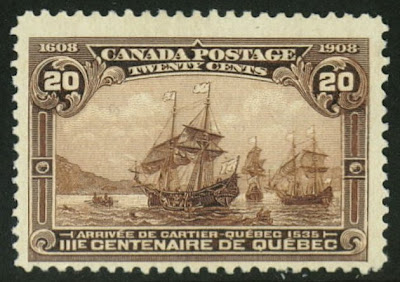 Cartier anchored near the Indian village of Stadacona. The area had long been populated by Indian hunters and fishermen. In fact, the future city was to take its name from their language, Kebec being the Algonquin word for “Narrowing of the Waters”.
The 1c blue-green depicts Cartier, shoulder to shoulder with Champlain, who was to take Québec’s story further. 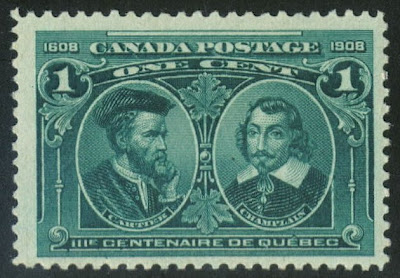 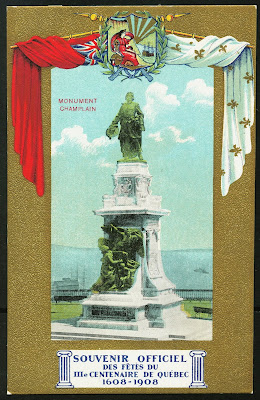 His departure is shown on the 15c brown-orange. 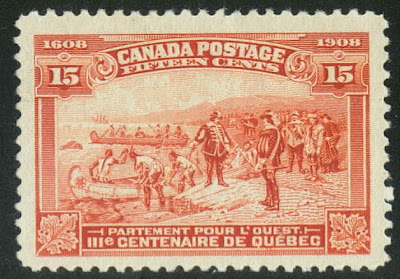 The design is inspired by Champlain’s own version of events, which has him leaving from the Isle of Sainte Helaine on Monday May 27th, accompanied by four Frenchman and one Indian, with their canoes laden with provisions, arms and merchandise.
When Champlain arrived in the Québec area, he set about fortifying it. The City of Québec was officially founded on 3 July 1608. It consisted of three main buildings and a deep moat to protect it from Indians. Champlain collectively referred to this stronghold as l’Abitation. It is depicted on the 5c indigo. 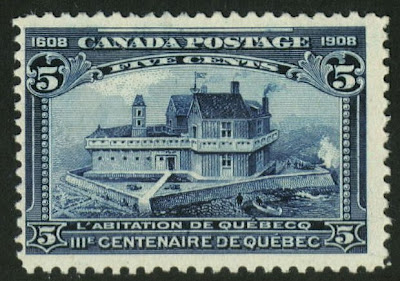 The design of this stamp was based on an illustration in Champlain’s narrative of his voyage to New France. L’Abitation was the first permanent settlement of the French colony “Nouvelle-France”, or New France. However, the French were not in a particular hurry to expand their colony. In 1663, the year Québec became the official capital of New France, its population was still no more than 550!
In the early 1660s, François de Montmorency-Laval (1623-1708) left France for Québec. 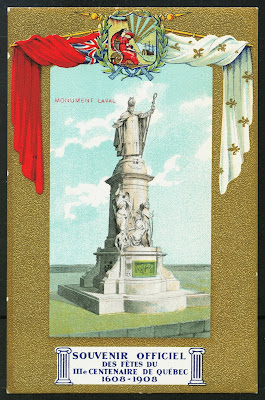 His main aim was to organize the Roman Catholic Church in the city, becoming its first bishop in 1674. He also founded a theological school there, the “Séminaire de Québec”. Later, after Queen Victoria granted a Royal Charter in 1852, the school was renamed Université Laval, in honour of its founding bishop.
In Laval’s early days, the “city” was still mostly made up of wooden dwellings. Only after a devastating fire in 1682 were most dwellings rebuilt in stone. The 10c violet shows what the city looked like in 1700. 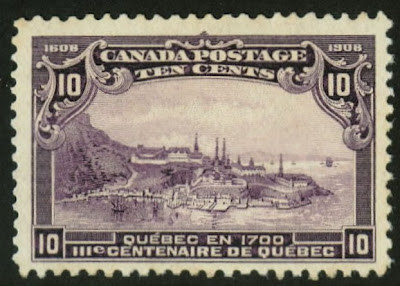 The design is based on an illustration from Bacqueville de la Potheries’ “Histoire de la Nouvelle France”.
Québec is the only city in North America to be surrounded by city walls. Its old parts, le Vieux Québec, are now a UNESCO World Heritage site. 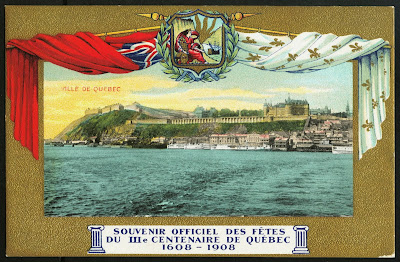 Québec has always played a major role in the battle for English supremacy in North America. English colonists from the south besieged Québec in 1629. This led to three years of English rule. A second attempt by the English, in 1690, was not successful and the French experienced a period of relative peace thereafter.
In 1759, the English laid siege to the capital once again, and after two months of bombardments, British General James Wolfe (1727-1759) defeated French General Louis-Joseph Montcalm (1712-1759) during the Battle of the Plains of Abraham. 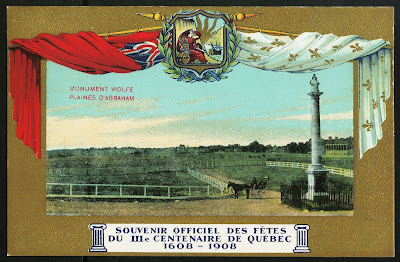 These two generals, who both died in battle, are depicted on the 7c olive-green. 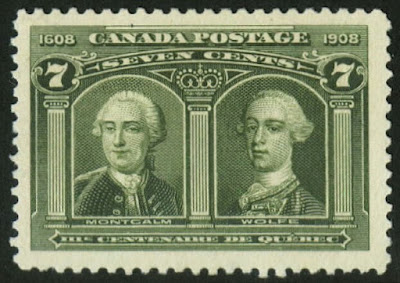 The design was based on existing portraits by Moncornet (Montcalm) and Houston (Wolfe).
The following year, the French tried to recapture Québec during the Battle of Sainte-Foy. The French were victorious but they were to lose Québec later to the English anyway. The “Monument des Braves” was erected to honour both French and English soldiers who gave their lives during the battle. 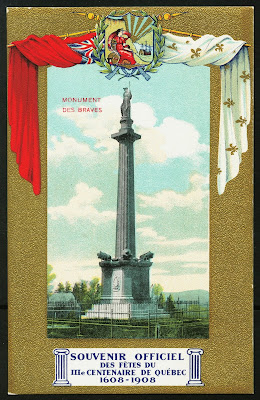 The Paris Treaty of 1763 ceded Québec once and for all to the British. The city then became the capital of the British colony the Province of Québec. The city flourished and became predominantly English. But when economic fortunes changed, the English moved away from the city towards the West, leaving the city once again mainly populated by the French, helped by an influx of French speaking peasants. Québec did manage to hold on to power as capital of Canada, but only for a few short periods. Afterwards, it was “downsized” to the capital of the Province of Québec with its population stabilizing and its growth decreasing.
And that’s how we find the city on 16 July 1908, the day the Tercentenary of Québec set was issued, just in time before the then Prince of Wales (later King George V) reached Québec to participate in the celebrations. On 22 July, He arrived on board the Indomitable, then the newest, largest and swiftest of British battleships. The Prince and Princess of Wales are depicted on the ½c sepia. 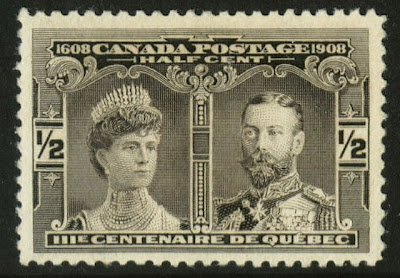 The design is based on photographs taken by Messrs. W. and D. Downey. The original die, however, shows that at first, the idea was to depict the Prince of Wales in civilian dress!

© 2009, AKPhilately
An edited version of this article was published in Stamp Magazine of August 2008.
Articles British Commonwealth