Skip to main content
on September 20, 2009
Thinking cap
I do not always go on about it (well, I do a bit, but still), but my thinking process as regards the way my "grand" collection is going forward, is still ongoing. That falling star of two nights ago, and my subsequent secret wish have led to the following luminous concept: Restriction!
It's just too much to be working on the number of collections I'm working on (or want to work on) right now. So I'm letting go of a big chunk and just keep two main collections: My recently so gloriously restored Wilhelmina collection, which I've tried to give up once and that didn't work so I'll not do that again, and my even more recently restarted Peacemaking collection, about which I will soon say more. What I'm letting go is a number of European definitives, which I kept alive because I have this vague idea of maybe when I'm over 50 writing books/booklets about. I've now decided to incorporate what I have in my existing general all world collection. I can always pick it up if that above-mentioned idea becomes less vague, but won't want to spend any time and/or money on it now.
So if I manage to stick to this plan, I'll have two demarcated collections, one primarily of stamps and the other venturing into postal history, and I can always add to my world collection through the material I have to get for writing my articles, so that'll statisfy my hunger for ever more stamps!
Sounds good, doesn't it?! I hope it works and I hope I can stick it, but you know me, I'm such a sucker when it comes to stamps!
:-)
Anyway, to tell you something about Wilhelmina (you see, I immediately get so focused that I manage to update my blog!), my latest item is a cinderella of 1913. 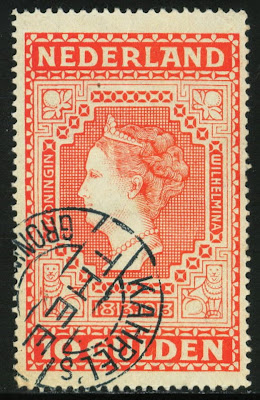 It is part of the 1913 set issued to mark the centenary of Dutch independence. The set of twelve features four portraits; those of the three Dutch kings: William I, II and III, and that of Wilhelmina. The stamps were so popular that the designs were used by a good number of companies for advertising material, such as this advertising label from a Dutch tea company. I already had the other two with Wilhelmina on, the 10c and 50c, but this is the top value, so I was very happy when I saw it on eBay! Now all I need is to get the proper 10g stamp! 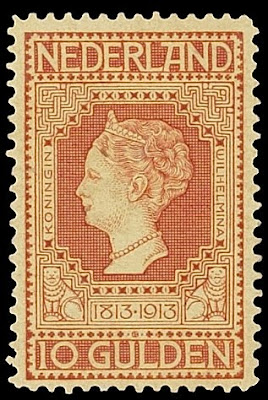 But that's such an expensive stamp, that I'll need to win the lottery first!
There are other versions of the cinderella as well, with the company's name incorporated into the design, but I haven't got any of those yet. All I have is a few kings stamps like that. 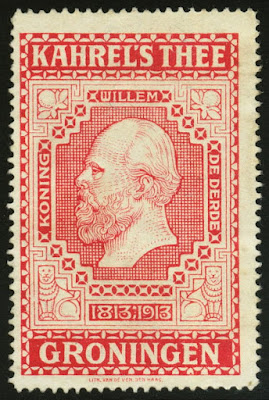 One last thing to notice is that the frame around the portrait of the cinderella is different from that of the real stamp. Actually, what they used is the frame of some of the kings' stamps! 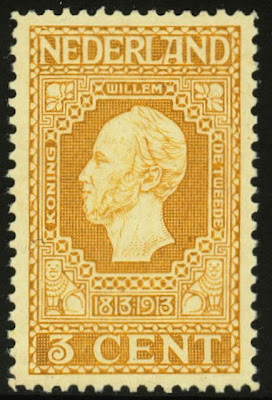