Skip to main content
on October 17, 2009
Conclusion
I'm back again! Sorry I took so long but sometimes with all the other stuff I have to write, my keyboard just dries up. Anyway, back with a vengeance. Well, hopefully anyway!
I may have told you that I've made a bit of a restart on my Peacemaking collection. It is going well so far, so I feel confident enough to share it with you. It will be a bit higgledy-piggledy, but I will label the posts in such a way that the various 'chapters' of the collection will be grouped together, making for a better read, eventually.
So let's start today at the very end: The Conclusion!
Apart from all the major issues that had to be resolved, the peacemakers also had to deal with numerous of minorities' claims and fears. They tried to impose obligations on the various governments to treat their minorities well, but this was rather futile in an age of growing chauvinism. The League of Nations was in charge of holding governments to their responsibilities, but gave up in the 1930s.
However, it was not all doom and gloom. There were a few hopeful signs, such as the case of the Aland Islands. The problem there was that the land was Finnish but the population overwhelmingly Swedish. The case was brought to the attention of the League and in 1921 they decided that the islands were to remain Finnish, but the treaty guaranteed the language and culture of its inhabitants. 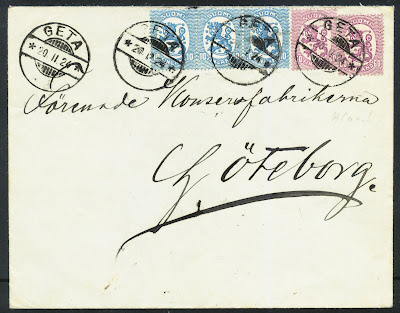 This 1924 cover shows that, after the treaty, Finnish stamps remained in use on the Aland Islands, whereas the cover is written in Swedish. 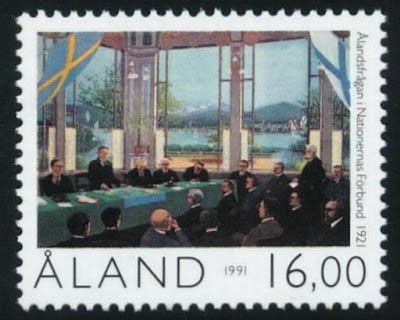 The League of Nations meeting where the islands' fate was decided upon, which took place in Geneva, Switzerland, on 24 June 1921, was commemorated on a 1991 stamp issue.
Peacemaking