Skip to main content
on October 18, 2009
Machins
Sometimes you need a little push to get going. That's what happened to me when I ordered an old postcard for my Peacemaking collection. The sender included two extra postcards, both modern, but both sent from here in Great Britain to Holland, and both being franked with Machin stamps.
And suddenly, without asking for it, my postal rate part of my Machin collection had grown from 1 to 3 items! Sometimes it's so easy to set up a collection! But of course you do need to find all the information needed, and for that I've found a wonderful website. Take a look, it's absolutely great, what time and effort and research must have gone into this!
So here are my latest two additions. 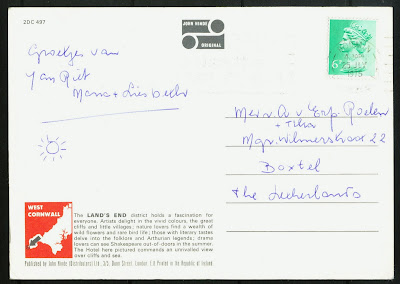 The first is a cover postmarked 25 July 1975, sent from Bodmin in Cornwall, England, to Boxtel in the Netherlands. The 6p pastel green, issued in 1971, prepaid the world postcard rate from 17 March 1975 to 29 September 1975, so that's only some six months. It does include the summer holiday period, so cards with this stamp on won't be extremely rare, but it is still a short period of usage. 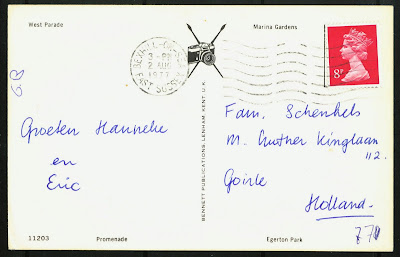 This is a cover postmarked 2 August 1977, sent from Bexhill-on-Sea in East Sussex, England, to Goirle in the Netherlands. The 8p red, issued in 1973, prepaid the world postcard rate from 13 June 1977 to 20 August 1979.
I can't wait to get to the next fair and get those cards for next to nothing to build a more complete picture!
:-)
Adrian
British Commonwealth Machins

nnnnnn said…
Hi Adrian, good to see you back.. yes that Machins site is brilliant.. I enjoy reading it when I get some time.. which like you is not very often these days.

glad you are still reading my blog. thanks for that

Look forward to reading more abut the machins and cards