Skip to main content
on November 12, 2009
Adenauer, Konrad
The question of the German Rhineland kept the peacemakers busy. Ideally, it was to be a buffer zone between France and Germany, and various ideas were floated. Demilitarize the area, or make it part of France even. The inhabitants had never got used to Prussian rule, but becoming French was probably a step too far. In early 1919, a separatist movement grew stronger. Rhineland a separate state? Konrad Adenauer, then mayor of Cologne, toyed with the idea of separatism, but, cautious as he was, he made sure to represent the moderates. Later that spring he gave up any ideas of a separate state. 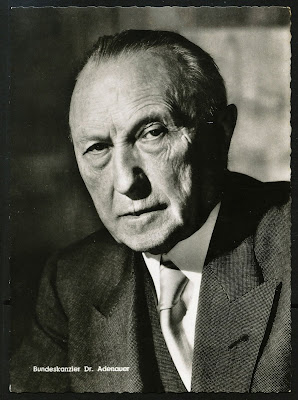 It is easy enough to find stamps with Adenauer on, especially since he went on to become West Germany's first chancellor in 1949. But in our Peacemaking story he was still 'only' mayor of Cologne; a fact many stamp issues tend to overlook. 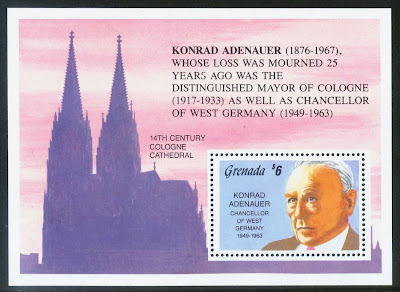 This Grenada miniature sheet of 1992, however, does give full mention to this fact and is therefore a perfect addition to the Konrad Adenauer sub-theme.
British Commonwealth Peacemaking