Skip to main content
on December 21, 2009
Combi-Mail
That's right. Ever heard of combi-mail? Well, I must admit that I hadn't, until I was introduced to F.J. van Beveren's book about it, called Introducing Combi-Mail - Aeropostal History. That's how I now know that combi-mail means airmail with added postal markings showing special postal service treatment. So there!
There are apparently many subclasses, such as "airmail service for the entire route not possible", "printed airmail labels or handstamped cachests showing the flown stage", or "Surface air-lifted mail", meaning that air transport over the entire route would be possible, but a less expensive alternative (surface mail) is considered satisfactory. But also included is propaganda for airmail, which also includes slogan postmarks.
I had a browse through my covers and found that it is not even that easy to find covers that fit into one of those subclasses. I suppose the easiest ones are the ones with slogan postmarks, such as on this 1947 airmail cover from Switzerland to the United States, claiming that airmail to foreign countries is both reliable and fast. 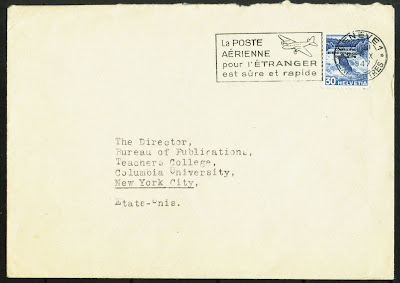 The only other interesting cover I found is also from Switzerland. 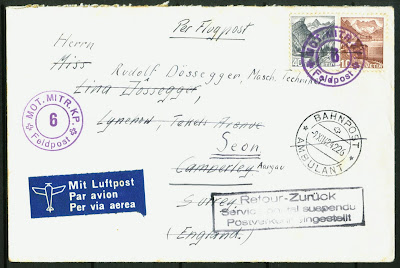 It is an interesting cover in itself, what with its fieldpost postmark, and travelling post office postmark. But when dealing with combi-mail it is the cachet in the bottom right corner that does the trick. The cachet states that the postal service was suspended (we're talking 1942 here) and that the mail is returned to sender.
SHAMELESS PLUG!
Now, if you're interest is aroused, then why not join the Netherlands Philatelic Circle and you'll get a copy of this book (hardback, 256 pages, written in English)completely free! Membership is only £15 per year (UK rate, it's £20 for the rest of the world), so it's a bargain, whichever way you look at it. You can contact the NPC here.
END OF SHAMELESS PLUG!
Back soon (I hope!).
:-)
Adrian
Italy and Switzerland