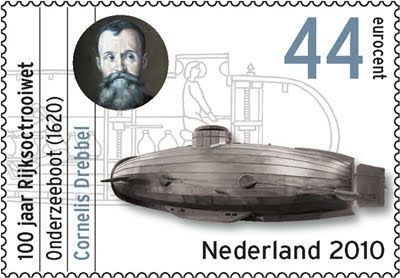 The stamp marks the invention of the first submarine by Cornelis Drebbel in 1620. When working for the English Royal Navy, he invented a submarine, made of a leather-covered wooden frame, with four oars. It is thought he produced oxygen for the passengers by arming nitre, which produces oxygen.
The submarine shown on the stamp is a replica, because the original submarine no longer exists.
:-)
Adrian
Benelux