Skip to main content
on September 18, 2010
Teething problems
I've not only joined the Cinderella Stamp Club lately, but also Stampboards.com. A great online community of collectors where you can ask anything you like and usually get an answer within hours! Although originally Australia-minded, it is now truly global and a feast to spend hours on!
A great thing, too, is that the members are allowed to sell/swap items. So when I found out that there was a fellow Wilhelmina collector there, I was happy, but when he started offering items for sale, I was even more chuffed! That's how I got two very nice items from the 1923 Silver Jubilee set. 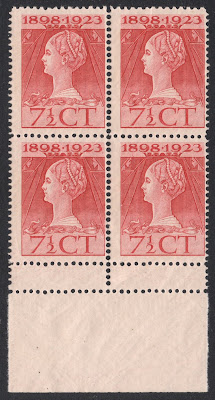 That set had to be printed and perforated in a very short time, because it was suddenly decided to use it as a definitive set. The enormous amounts of stamps to be produced in a very short time obviously led to lots of errors, and not all of them escaped quality control! Although the examples here do not directly affect the stamps themselves, which is maybe why they were allowed to slip through the safety net, but the extra perforation lines in the sheet margins are very collectable!

They exist both horizontally and vertically, with the latter very much the rarer of the two, and here's me, having an example of each now!
Yeay!
:-)
Adrian
Wilhelmina