Skip to main content
on February 06, 2011
Ambassador
My Peacemaking collection is more and more veering towards social history I feel, and I quite like that! I started off collecting just stamps and covers for this theme, but soon I was adding postcards and cinderella, and now I find myself getting all excited about press photographs of all things!
I was talking to a friend yesterday about how good it would be to be able to walk into the past, have a look around and then run quickly back to the safety and luxury of our current lives! I suppose my collection is my way of walking around in the past, from the comfort of my desk chair!
And so I was very chuffed with my latest addition which arrived yesterday: a press photograph of the French Ambassador to the United States in December 1918: J.J. Jusserand. 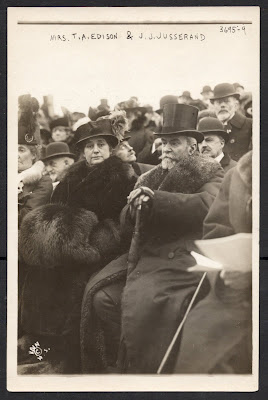 I wanted to include him because he was among the party of US big shots who went on the ship to Europe to attend the 1919 Peace Congress in Paris. My initial info was just that the French Ambassador went along with the party. But it's great to have internet, for it was rather easy to find out who the French Ambassador was at the time.
Now I'm on to the next person on the ship: the Italian Ambassador to the United States. I've found him as well: it's Count Macchi di Cellere, but his name is spelled in many ways so he's not that easy to find. So far I've only found reproduction photographs of him, which I don't want. It's got to be the real thing. But I suppose, if I'm patient enough, something from his time will come along! Until then I'll just be happy with Jusserand!
:-)
Adrian
France Peacemaking