It's been a while since I last mentioned our dear old queen Wilhelmina, but don't worry, she's still on the cards! I find that collecting her goes in fits and starts. I had a real fling some time ago because I had to display her at my local society last February. After that I had had enough of her, but now she's back with a vengeance!

The thing is, you see, that next year our local society is organising the ASPS (Association of Scottish Philatelic Societies) Congress in Perth. As host society we have to display umpteen frames, and I've been asked to do four frames of Wilhelmina. That's 64 sheets! Now I'm alright with that if I include the definitives of the overseas territories, and all the commemorative stamps, but seeing that I prefer to do just the Dutch definitives, I really need to give my collection a bit more meat.

And so I'm back looking at all the auction sites and catalogues, in search of more stuff to add. Great fun of course but also rather frustrating because I've found that, especially on eBay, the majority of dealers who have what I want are from Holland (makes sense) and most of those only send to Holland, which is a bit of a bummer. But I've finally found one who has lots of plate flaws and who ships to the UK as well! So here's my latest addition. 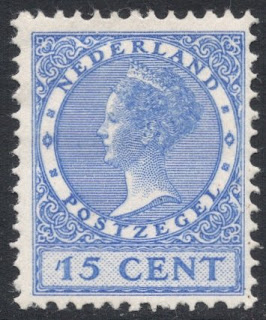 Anonymous said…
Adrian,
There is a large Dutch community in the |Toronto area. Perhaps you could find what you want from the dealers here.
June 29, 2011 3:16 am