I've finally sorted the remainder of my French lot and, before I come to today's topic, will just show you another heraldry stamp. 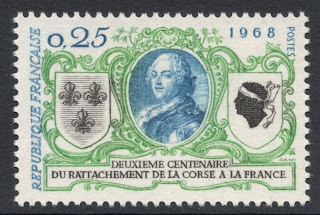 Very much like the other one, but this time celebrating the bicentenary of the union of Corsica and France. As in the other stamp, we have the arms of France on the left, and here we see the arms of Corsica on the right.

But the reason I got this whole lot was because I needed a stamp marking the armistice of 11-11-1918. Now I haven't looked very specifically into this, but a two-day search left me with only one option: 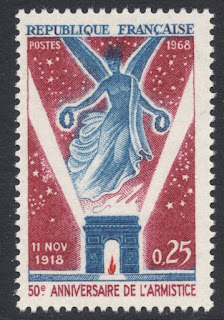 This French stamps marks the 50th anniversary of the armistice, and was the earliest stamp I could find to actually mention the date. There's a lovely French stamp from 1938, which I would rather have used, but that only mentions the celebratory date of 11-11-1938.

You'd think that at the time more countries would have marked the occasion, even though in 1918 we weren't yet bombarded (excuse the pun) with commemoratives. But as far as I know it's only the USA who issued a victory stamp, in early 1919. 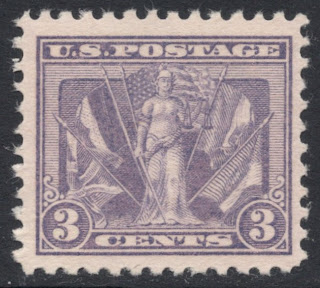 But if you know of any others, let me know!