Skip to main content
on July 12, 2011
Six or eight?
Yes, I'm still on the European Coal and Steel Community (ECSC or CECA). I just received my latest item which is this 2001 stamp from Luxembourg, marking the 50th anniversary of the Treaty of Paris, which founded the ECSC. 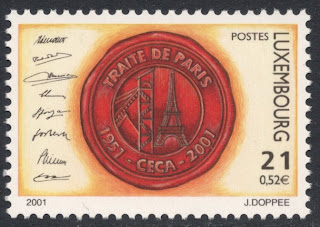 Now the ECSC was founded by six nations: West Germany, France, Italy and the Benelux. So how come there are eight signatures on the stamp? I only recognised the top one, that being Germany's Adenauer. Thankfully, a quick look on the internet gave me the full list of signatories:
1) Konrad Adenauer (Federal Republic of Germany)
2) Paul van Zeeland (Belgium)
3) Joseph Meurice (Belgium)
4) Robert Schuman (France)
5) Carlo Sforza (Italy)
6) Joseph Bech (Luxembourg)
7) Dirk Stikker (Netherlands)
8) Jan van den Brink (Netherlands).
Now all we need to find out is why both the Netherlands and Belgium had two signatories.....
:-)
Adrian
Balkans Peacemaking